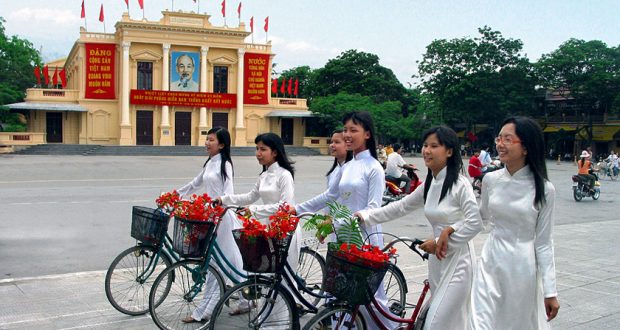 Hai Phong is located in the center of the Red River and in the economic growth triangle of the Northern Vietnam: Hanoi – Hai Phong – Quang Ninh.

It is approximately 100 kilometers from Hanoi, the capital of Vietnam. The city serves as the primary seaport for the northern region of Vietnam. Hai Phong is one of the 3 largest cities of Vietnam (after Sai Gon and Hanoi). It was built into a commercially city anciently and after the French domination in July 1888. Hai Phong is the short form of “Defense of Coastal Region”.

At present time, Hai Phong is the city for Trade and tourism, a communications focus by all means (on roads, on waterways and by airways, railways). It has some places of interest such as: Do Son beach, Cat Ba National park…

Hang Kenh Communal House, also referred to as Nhan Tho Communal House in Sino-Vietnamese. Built in 1717, Hang Kenh Communal House was later expanded in 1905. The main front hall, also called dai dinh, connects to the back part through a tiled roof bridge. There are lots of valuable items in the communal house, of which there are 156 pieces with a dragon as the main theme. Altogether, there are 308 dragons of different shapes and sizes. The pagoda also houses a statue of Ngo Quyen and a palanquin.

Do Son Beach is situated in Do Son Dist., 20km from the southwest of Haiphong City, about 120km from Hanoi. Do Son Beach is one of the most famous beaches in Vietnam.  Do Son is a small peninsula located between the Lach Tray and Van Uc Rivers. Do Son beaches are shaded by thousands of sandalwood trees and surrounded by mountains and Pine Hills.