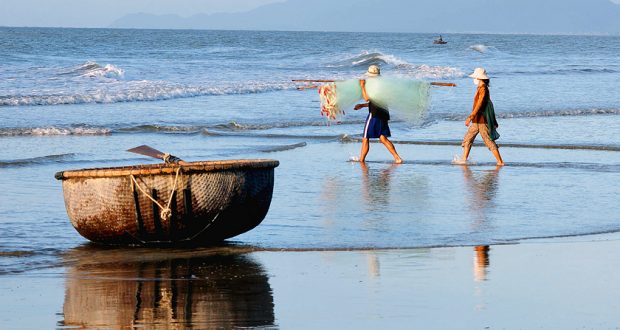 Vung Tau is the capital of Ba Ria-Vung Tau Province, about 130 km from Sai Gon.

It has traditionally been a significant port, particularly during Vietnam’s period of French rule. Today, the city’s importance as a shipping port has diminished, but it still plays a significant role in Vietnam’s offshore oil industry. Vung Tau is the only petroleum base of Vietnam where crude oil and natural gas exploitation activities dominate the city’s economy and contribute principal income to Vietnam’s budget and export volume.

Vung Tau shipyard’s reconstruction is scheduled to be completed in 2008, supplied with up-to-date anchor handling supply vessels of Aker.

Before 17th century, the city was under Khmer rule and the town began to develop as a seaside resort at the beginning of the 20th century. Vung Tau is more interesting for its extensive beaches. Tourists often prefer swimming at Back Beach (Bãi Sau) but sightseeing in Front Beach (Bãi Trước). Back Beach is well-known for its over 10 km of fine sand. In Vung Tau there are some relatively nice beaches such as Back Beach, Bai Troc, Bai Dau Beach, Bai Nghinh Phong. Vung Tau is a rich area. It is famous for its various natural resources and has now attracted direct investment from outside.

Right in here, the sea goes far into the land and the rock mountain goes from the land to the sea establishing romantic and hidden small beaches. Nearby, the Temple of Southern sea Saint and Tinh Xa nirvana are attractive tourist sites, which were built on one of these rock mountains. Tourists should walk on about a few meters to see a 30m-high statue of Mother Maria shining in the green picturesque forest and sea landscape.

Niet Ban Tinh Xa Monastery is one of the largest pagodas with modern architectural lines in Vung Tau. This monastery was built on a hill from 1969 to 1974. The monastery has a flag pillar, a symbol of an ancient lotus stupa. Among the many items to observe are the 42 stairs paved with bricks, a 3.5-ton bell, intricate mosaic work, and a 12-m Buddha statue.

Thich Ca Phat Dai is situated about 3km from the center of Vung Tau City. The site of the pagoda occupies an area of 6ha on the side of Big Mountain. The beauty of the 19m high pagoda lies in the harmonious combination between the natural surroundings and the architectural structure. This pagoda exists exclusively for religious worship. The pagoda is unique in its white cement construction of the giant statue of Thich Ca Buddha sitting on a large lotus blossom.