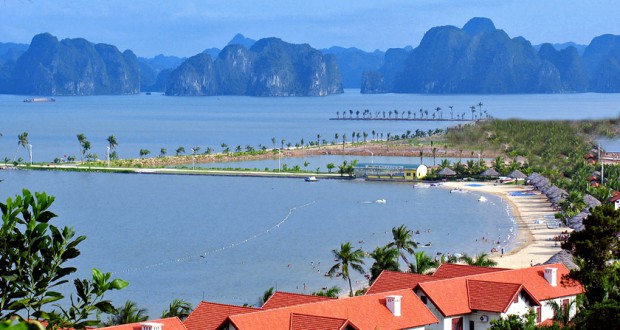 On the south-west side of Halong City is Tuan Chau Island, a very pretty schist island, with a luxuriant pine forest. It has an area of 2.2 km², and to the east and south are two man made beaches endowed with very white, fine sand. The octagonal house where President HoChiMinh stayed when he vacationed here has now become a memorial site. Nowadays, Tuan Chau Island is one of the most attractive destinations in Ha Long City.

Tuần Châu is in an important position at the entrance of the waterway system of ‘Thăng Long’, ‘Bặch Đằng’ and ‘Vân Ðồn’. This is why in the feudal time, the royal army set up a guard station here to patrol and defend the borderland. The Office of Feudal Customs was also installed there.

The island also has many archaeological sites pertaining to the ancient Hạ Long culture from 3,000 to 5,000 years ago.

On the total area of 400 ha, Tuan Chau has the population of 1500. As planned, the total area of Tuan Chau will be widen to 675 ha. It enjoys the advantage of having both road and river transportations. It is about 18 km away from National Highway No.1. This route is an important blood vessel of the robust Hanoi – Hai Phong – Quang Ninh economic triangle. It takes about 3 hours from Mong Cai ( 2 hours by boat) and 1 hour from Hai Phong.

One can go to Tuan Chau Island via the 2-km cement road from the mainland. Construction of this road was officially started on February 28, 1998. Investments have been poured into the island to turn it into a modern tourist resort. It includes attractions such as the dolphin, sea lion, and performing-seal club, animal circus club, golf course, cultural-sports center, beach, rural market, ornamental fish lake, villas in Hill 1 and Hill 2, guesthouses, five 80-room villas by the beach. The ensemble of five restaurants and one round house built in the pagoda motif can serve up to 500 guests at the same time.

About 8km away from the Bai Chay Tourist Wharf  Tuan Chau Beach, it is a sandy artificial beach which stretches over 3km. Besides swimming, tourists can enjoy such fascinating extras as sightseeing, entertainment and sports activities, including climbing or camping in the eco-tourism zone.