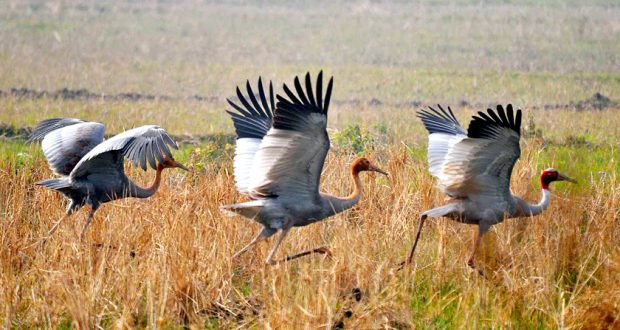 In 1985, Tram Chim was established by the provincial government as Tram Chim Afforestation and Fishery Company aimed at planting cajuput and exploitation of aquatic resourses and also preserve the original Dong Thap Muoi area. In 1986, the sarus crane was found here. In 1991, Tram Chim became provincial-level Natural Reserve to protect crane (Grus antigone sharpii). In 1994, the reserve became a national natural reserve by the decision Circular 4991/KGVX.

With a system of swamps, grass-plots and criss-crossing canals, the 7,612 ha Tram Chim National Park has become an ideal habitat of more than 130 species of plants, 100 vertebrates, 40 species of fish, 147 rare and precious species of birds, especially the red-head cranes.

From January to May each year, when sky is clear, visitors will see from the horizon many black spot coming. It is crane flock returning after months of emigrating to evade flood. This is also the season for photographing cranes in the dawn and sunset.

Tram Chim National Park is one of the best developed and most well-known sites for ecotourism in the Mekong Delta. The national park already has basic tourist facilities, and previously received many visitors. There are some small guesthouses in Tam Nong town with basic facilities.

Tram Chim National Park, with natural history of collective ecology of geomorphology, hydrography and underwater creatures, is an ideal rendezvous place of tourists from all over the world.