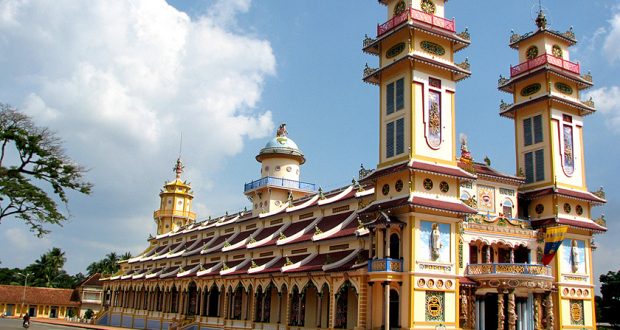 Tay Ninh is approximately 90 km to the northwest of Ho Chi Minh City. It is the capital of Tay Ninh province, which encompasses the town and much of the surrounding farmland.

The city is most famous for being the home of the Cao Dai religion, an indigenous Vietnamese faith that includes the teachings of the major world religions. The religion became formalized in 1926 and has developed. The Cao Dai religion’s Holy See, built between 1933 and 1955, is located around  5 km to the east of Tay Ninh’s town centre.

The Temple is constructed on nine levels, which express the 9 steps to heaven. On each level there is a pair of columns decorated with dragons. The main temple consists of an intriguing complex of architectural styles, ranging from Oriental to European.

Between 1975 and 1979, Tay Ninh province was increasingly encroached upon by Cambodian Pol Pot’s Khmer Rouge. This area is strongly influenced by Caodaism.

About one km to the east of Tay Ninh are a number of Cham Temples and about 15 km from Tay Ninh is located big and nice Ba Den mountain (Black Lady mountain). The complex includes three mountains: Heo, Phung and Ba Den, of which the 986m-high Ba Den is the highest peak in the south. According to legends, beautiful Ly Thi Thien Huong, Black Lady, was forced to marry the son of a rich mandarin while she fell in love with a poor man who was fighting the aggressors. Rather than marrying a man she did not love, she threw herself from the mountain. Several shrines and pagodas were built in the mountain as well as in the caves. Ba and Hang Pagodas attract many pilgrims during the New Lunar Year and Vu Lan Festivals. Ba Den Mountain was where the headquarters of the liberation force of South Vietnam were located. During war time, many tough battles were fought in that area.