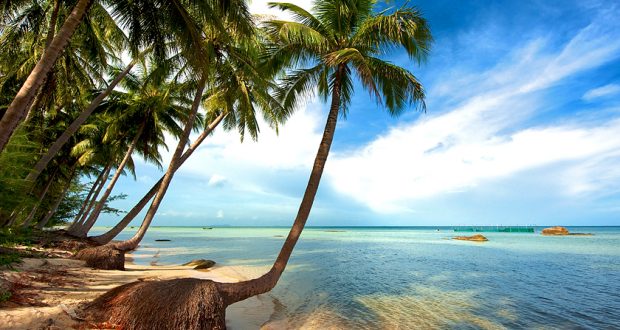 Phu Quoc is an almost unknown destination in Vietnam. International tourists and Vietnamese alike just recently discovered Phu Quoc. It is not hard to see why many tourists are boasting of the splendid natural beauty and untouched remote beaches of this spectacular tropical island.

Geographically, Phu Quoc island is located in the Gulf of Thailand, covering a total area of approximately 580 km², close to the main asian cites of Singapore, Bangkok, Hong Kong and Kuala Lumpur. It is closer to Cambodia than the closest mainland town of Ha Tien in Vietnam in the Kien Giang province, which is 46 km away.

Phu Quoc is called the island of “99 mountains” because of its many sandstone chains gradually descending from the north to the south. The longest one is Ham Ninh which stretches for 30 km along the eastern edge with its highest peak called Mt. Chua (603m).

Although Phu Quoc is a new holiday destination, in the first quarter of 2007, about 50,000 visitors came to the island of which 50 per cent were foreign tourists.  According to new targets released by the Government, Phu Quoc is aiming to attract 2-3 million visitors annually by 2020, with a larger portion of foreign tourists.

Phu Quoc is also called the Emerald Island because of its natural treasures and infinite tourism potential. The island is well known for its high-quality fish sauce; Phu Quoc fish sauce smells particularly good since it is made from a small fish, ca com, with a high level of protein. The island produces 6 million liters of fish sauce every year.

Phu Quoc Island has many harbors such as An Thoi and Hon Thom where international and domestic ships anchor. Also, there are several historical sites on the island: National Hero Nguyen Trung Truc’s military base, King Gia Long relics from the time he spent on the island, and Phu Quoc Prison.

Off the coast of the island emerges a group of 105 islands of all sizes. Some of them are densely inhabited such as Hon Tre and Kien Hai, 25km from Rach Gia. Visitors can spend time on the beach or hike while observing the wild animals.

Phu Quoc is blessed with favourable natural environment like the virgin forest of over 37,000 hectares, white sandy beaches, coral gardens offshore, varieties of wildlife species, so it is not hard to see why the island has great tourist potential. The government has formed a master plan to develop the island into a high quality eco-tourism destination by 2020. As investment starts to flow into Vietnam, the Island will slowly undergoing development and improved infrastructure. The Prime Minister has offered the best preferences possible for domestic and foreign investors to allow development of the Island, leading to an international standard tourist and trade centre by 2010 through to 2020.

For the time being, tourists visiting phu quoc can still enjoy the experiences of finding a remote beach lined with coconut tress and calm blue waters.