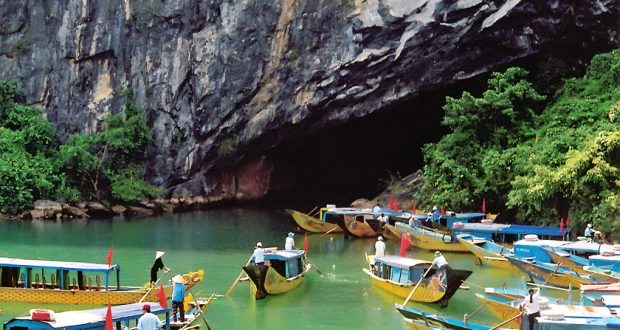 Phong Nha – Ke Bang is a national park and UNESCO World heritage Site in the Bo Trach and Minh Hoa districts of central Quang Binh provine, in north-central Vietnam, about 500 km south of the nation’s capital of Hanoi.

Phong Nha – Ke Bang area is noted for its cave and grotto systems as it is composed of 300 caves and grottos with a total length of about 70 km, of which only 20 have been surveyed by Vietnamese and British scientists; 17 of these are in located in the Phong Nha area and three in the Ke Bang area. After April 2009, total length of caves and grottoes are 126 km. Before discovery of Son Doong Cave, Phong Nha held several world cave records, as it has the longest underground river, as well as the largest caverns and passageways.

The park derives it name from Phong Nha cave, the most beautiful of all, containing many fascinating rock formations, and Ke Bang forest.

The plateau on which the park is situated is probably one of the finest and most distinctive examples of a complex karst landform in Southeast Asia.

This national park was listed in UNESCO’s World Heritage Sites in 2003 for its geological values as defined in its criteria viii.

The Phong Nha Cave is 7729 m long, contains 14 grottos, with a 13,969 m-long underground river. The scientists have surveyed 44.5 km of grottos in this cave so far, but tourists can only penetrate to a distance of 1500 m. The main Phong Nha cave includes 14 chambers, connected by an underwater river that runs for 1.5 km. The Outer Cave and some of the Inner Caves have roofs that tower between 25 and 40 meters above the water level.

Tien Son cave is another beautiful cave in Phong Nha – Ke Bang area. Tien Son cave was discovered by a local inhabitant by accident in 1935. It is located in Son Trach Commune, Bố Trạch District. The entry mouth of Tien Son is 1 km from Phong Nha cave, at an altutude of 200 m. This cave is 980 m in length. A 10 m deep hole is situated 400 m from the entry mouth, then a 500 m long underground cave, dangerous for tourists and therefore is open to professional expeditionists only.

Thien Duong (Paradise) Cave is a newly found cave in this area. Prior to the discovery of Son Doong Cave, it was regarded as the largest and longest cave in Phong Nha-Ke Bang. This cave is 31 km long, longer than Phong Nha Cave which had been considered the longest cave in this national park. The height can reach to 100 m and 150 wide. The limestone formation is also more spectacular than that of Phong Nha Cave.

Son Doong Cave is one of the most recently discovered caves in the national park. Found by a local man and explored and publicly announced by the British cave scientists of the British Cave Research Association, it is regarded as the largest cave in the world. The biggest chamber of Son Doong is over five kilometers in length, 200 meters high and 150 meters wide. With these dimensions, Son Doong overtakes Deer Cave in Malaysia to take the title of the world’s largest cave.

In April 2009, the world’s largest cave of Son Doong was discovered by a team of British cave explorers of British Caving Association.