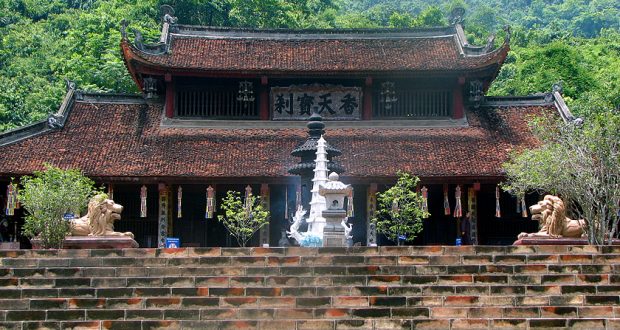 Perfume Pagoda is 70 km southwest of Hanoi. It is in fact a vast complex of Buddhist temples and shrines built into the limestone Huong Tich mountains.

Here you can take boat to visit Trinh Temple, then climb up to Thien Tru Pagoda, Tien Son Cave and Huong Tich Cave.

Approaching from the Day River, one will first come across Den Trinh (Presentation shrine), also known as Den Quan Lon (Shrine of High-ranking Mandarin), built to worship one of the generals of a Hung King. This large shrine has a gate with two kneeling elephant statues on each side. Inside the structure is a large ceremonial room.

Beyond Den Trinh is Thien Tru (Heaven Kitchen) Pagoda, also known as Chua Ngoai (Outer Pagoda). Here one will find Vien Cong Bao Stupa, a brick structure where Ch’an Master Vien Quang, who led the reconstruction of the pagoda, is buried. Thien Thuy stupa, a naturally occurring structure that is the result of the erosion of a rocky hill, is also nearby.Thien Tru is also home to a bell tower and Hall of the Triple Gem, both built in the 1980s. Inside the Pagoda there is a large statue of Quan Am Nam Hai.

It is thought that the first temple was a small structure on the current site of Thien Tru which existed during the reign of Le Thanh Tong in the 15th century. Legend claims that the site was discovered over 2000 years ago by a monk meditating in the area, who named the site after a Tibetan mountain where Lord Buddha practiced asceticism.A stele at the current temple dates the building of a terrace, stone steps and Kim Dung shrine to 1686, during the reign of Le Hy Tong, at around the same time that Chua Trong was being constructed.

On the route from Thien Tru to Huong Tich cave is Giai Oan Temple, also called ‘Clearing Unjust Charges’ Pagoda. Here there is a pond called Thien Nhien Thanh Tri (Natural Blue Pond), also called Long Tuyen Well, and Giai Oan stream, with its 9 sources.
The center of the Chua Huong complex, Huong Tich Cave houses Chua Trong (Inner Temple). The mouth of the cave has the appearance of an open dragon’s mouth with Chinese characters carved in a wall at the mouth of the cave.

The characters (Nam thien de nhat dong) are translated as “first grade cave of the South World” and the carving is dated to 1770. The words are attributed by some to the ruler of that time, Thinh Do Vuong Trinh Sam. Inside the cave there are many statues.

There is a large statue of Lord Buddha, as well as one of Quan Am, both made of a green stone. There are also statues of Arhats and various other figures. Among the naturally occurring features of the cave are numerous stalactites and stalagmites, some of which are worn smooth from years of rubbing by visitors to the cave.