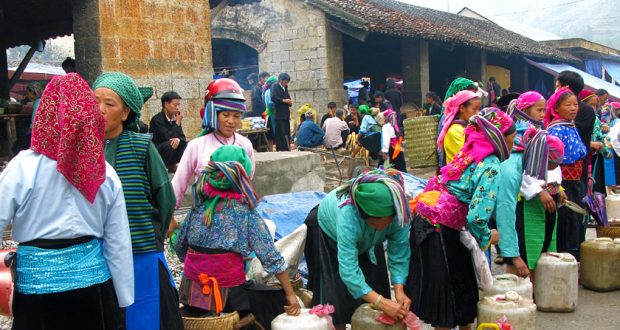 Ha Giang is 300 km from  Hanoi. It is  located at the highest latitude in Vietnam and surrounded by Cao Bang, Tuyen Quang, Lao Cai, and Yen Bai. It shares a border with China in the north. Many ethnic minorities, including the Dao, H’mong, Tay, and Nung, live in Ha Giang province .

Much of the province is too mountainous for agriculture, leaving much of the land covered by forests. Hà Giang’s central plateau is good for growing plums, peaches, persimmons and tea.

Quan Bạ Valley, located at 45 km from Hà Giang, at 7,945.8 m elevation, is called the “Heaven’s Gate” and has a TV transmitter on a summit. It is known for its secret grottoes and caves, colourful orchids, plum and peach trees, persimmon orchards, medicinal plants and many more.

The town of Dong Van is famous for its Phó Bảng Street which features multistoried buildings built with clay bricks and tiled roofs. The weekly market is where the Tay and H’Mông ethnic groups of the province visit in large numbers to trade in various types of goods and colourful hand woven cloth.

Doi Thong (Pine Hill) settlement, is an ancient settlement dated back to 30,000 years, belonging to the Son Vi period as established by archaeological excavations. The excavations had unearthed antiquary axe heads and primitive tools which are displayed in the local museum at Hà Giang and the History Museum in Hanoi.

Ha Giang museum, located in the centre of Hà Giang town, not only has an array of display of findings from archaeological excavations but also houses historical artefacts, bronze drum collection and also costumes of the local ethnic clans. Museum building is in form of a big lotus opening up its petals, in red and white colour mansion.

Lang Si is a village at the Lang Si pass where the White Hmong tribes assemble at the market held once every six days. The village is 116 km from Hà Biang and parts of the border wall built by the French army are seen here delimiting the border of the White H’Mông Kingdom. It is a honey producing area and has many apiaries.

Sa Phin is a small town in the remote Sà Phìn valley (2 km from Chinese border) where H’Mông Kings ruled. The unique feature of the place is of the large double storied houses which are built in Chinese style made out of yellow bricks with Chinese style roof. The twin white towered palace building is distinct among the 20 odd buildings.

Ha Giang is famous for its Dong Van Sunday market of  ethnic groups, the beautiful nature of Ma Pi Leng pass and especially the Love market of Khau Vai which happens once a year, often falls in May, where the colorful people gather for their old loves and new ones, and is the place where the tribes sell their local products like food, vegetable, local textiles.