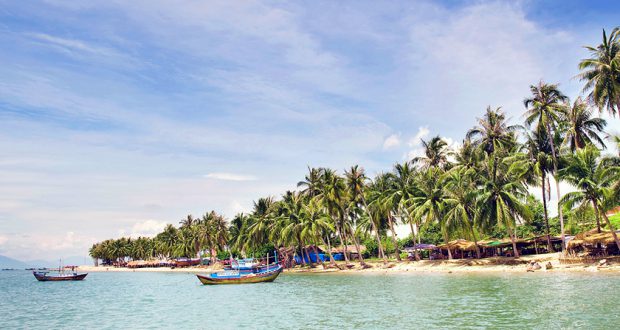 Nha Trang is a coastal city and capital of Khanh Hoa province, on the South Central Coast of Vietnam. It is 1450 km South of Hanoi and 450 km North of HCMC. The name of Nha Trang comes from Cham word “Eatran” (“Ea” means water and “tran” – bamboo). NhaTrang possesses many islands, clean beaches, coastal climate, sunshine. Average temperature is 23° C. Summer lasts from May to August. The rainy season in Nha Trang runs only from October through early December.

Nha Trang is well known for its pristine beaches and excellent scuba diving and is fast becoming a popular destination for international tourists, attracting large numbers of backpackers as well as more affluent travelers on the Southeast Asia circuit. It is already very popular with Vietnamese tourists. Nha Trang Bay is widely considered as amongst the world’s most beautiful bays.

Lying off Nha Trang is the Hon Tre Island (Bamboo Island), with a major resort operated by the Vinpearl Group. The Vinpearl Cable Car, a gondola lift system, links the mainland to the five-star resort and theme park on Hon Tre Island.

Nha Trang is a stopover for annual yacht races starting in Hong Kong. In recent years, the city has welcomed many five-star sea cruises. In addition to sail boat racing, Nha Trang provides a rich variety of tourist activities for visitors. Island hopping, scuba diving, water sports and other sporting activities can be enjoyed in the city.

The local cuisine is most famous for fresh seafoods and barbecued pork rolled in rice paper. The area’s Bird’s nest soup is deemed one of the best in Vietnam. Bird’s nests are collected in the wild, on bird farms on the islands off the coast and even in some houses in the inner city. The farmed bird in question belongs to the swiftlet group, popularly referred to as yến hàng (Aerodramus fuciphagus germani).