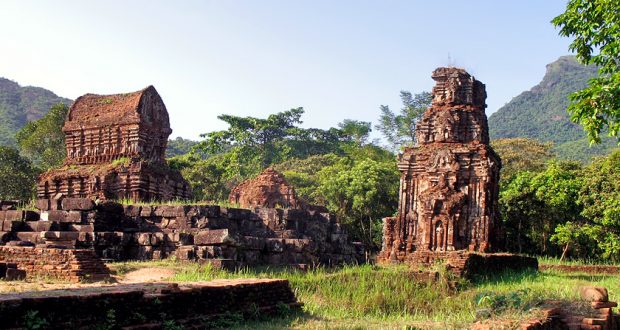 My Son Holy land in Vietnam – a masterpiece of Cham Architecture and My Son Holy land – a unique beautiful sanctuary world of the ancient Cham religion, is day by day attracting thousands of tourists elsewhere.

My Son is located near the village of Duy Phu, in the administrative district of Duy Xuyen in Quang Nam province in Central Vietnam, 69 km southwest of DaNang, and approximately 10 km from the historic town of Tra Kieu. The temples are in a valley roughly two kilometres wide that is surrounded by two mountain ranges.

From the 4th to the 14th century A.D., the valley at My Son was a site of religious ceremony for kings of the ruling dynasties of Champa, as well as a burial place for Cham royalty and national heroes. It was closely associated with the nearby Cham cities of Indrapura (Dong Duong) and Simhapura (Tra Kieu). At one time, the site encompassed over 70 temples as well as numerous stele bearing historically important inscriptions in Sanskrit and Cham.

My Son consists of more than 70 monuments spread over a large area. It was rediscovered and investigated by French archaeologists of the École Française d’Extrême- Orient in 1898. Their excavations revealed a site that had been settled from the early eighth to the 15th centuries, the longest uninterrupted period of development of any monument in Southeast Asia. Its maximum population is unknown but it seems to have had a holy or spiritual function rather than being the seat of power and was, very probably, a burial place of its god kings.

Art historians have classified the architectural and artistic legacy of Champa into seven artistic styles or phases of development. Six of the styles are represented at My Son, and two are believed to have originated from there. They are known as the My Son E1 Style and the My Son A1 Style. In particular the temple known as “A1” is often referred to as the architectural masterpiece of the Cham.

Most of the temples at Mỹ Sơn were made of red brick, and only one (the temple labelled “B1”) was made of stone. Even the decorative carvings on the Cham temples were cut directly onto the bricks themselves, rather than onto sandstone slabs inserted into brick walls as is observable for example in the 9th century Cambodian temple of Bakong.