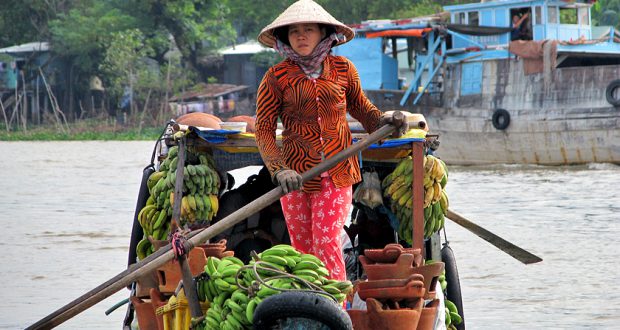 The Mekong Delta is the region in southwestern Vietnam where the Mekong River approaches and empties into the sea through a network of distributaries. The Mekong delta region encompasses a large portion of southeastern Vietnam of 39,000 square kilometres (15,000 sq mi). The size of the area covered by water depends on the season.

The Mekong Delta, as a region, lies immediately to the west of Ho Chi Minh City, roughly forming a triangle stretching from My Tho in the east to Chau Doc and Ha Tien in the northwest, down to Ca Mau and the South China Sea at the southernmost tip of Vietnam, and including the island of Phu Quoc.

The Mekong Delta region of Vietnam displays a variety of physical landscapes, ranging from mountains and highlands to the north and west to broad, flat flood plains in the south. This diversity of terrain was largely the product of tectonic uplift and folding brought about by the collision of the Indian and Eurasian tectonic plates about 50 million years ago. The soil of the lower Delta consists mainly of sediment from the Mekong and its tributaries, deposited over millions of years as the river changed its course due to the flatness of the low-lying terrain.

This topographical formation has made Ben Tre the land of diverse ecological features, with salt- and saltish-water as well as fresh water fauna and flora. It has plenty of sea food resources along with abundunt fresh water products.

My Tho is the capital city and municipality of  Tien Giang Province, located in the Mekong Delta region of southern Vietnam.

It is a popular starting point for tourists to take a boat trip on the Mekong River.

My Tho is the subject of “The Lesson,” a chapter in a memoir of the Vietnam War by Tobias Woolf, In Pharoah’s Army: Memories of the Lost War, describing the events of the 1968 Tet Offensive there.

In My Tho you can visit Vinh Trang pagoda – the oldest and famous one in the South Vietnam, My Tho church, Dong Tam snake farm.

Vinh Long is on the Co Chien river, which branches out from the Mekong at the narrows of My Thuan about 10 kilometers upstream, only to meet it later downstream. Across the Co Chien River from Vinh Long are the An Binh and Binh Hoa Phuoc islands, some 15 kilometers across, with the Mekong River on the other side. A number of canals run through Vinh Long, with tall vehicular bridges crossing them. Transport by boat is also possible, although parts of the town, particularly An Binh, become unreachable at low tide. A temple of literature is at the end of an old wet market along the canal Lavoo Nu.

Vinh Long is about two hours from the large town of Can Tho in the adjacent Hau Giang Province, and about three hours from Saigon. The floating market town of Cai Be is on the other side of the An Binh island and is the frequent destination for tourist boats from Vinh Long.

Can Tho is the biggest city in the Mekong Delta. The city is located on the south bank of the Hau River, the bigger branch of the Mekong River. It is 169 km from Ho Chi Minh City, Vietnam’s largest city. Can Tho’s climate is tropical and monsoonal with two seasons: rainy, from May to November; and dry, from December to April. Average annual humidity is 83%, rainfall 1,635 mm and temperature 27 °C.

Since the colonial days, it has been the delta’s major center of rice cultivation. There is an important rice research institute here, as well as a university. The city is surrounded by many canals and fertile rice fields.

Chau Doc is a district and town in An Giang province, bordering Cambodia, in the Mekong Delta and possesses both the largest Khmer and Cham populations in Vietnam. It is situated 250 km west of Ho Chí Minh City. You can go by boat from Chau oc to Phnom Penh, Cambodia.

An interesting and curious feature of Chau Doc are the floating houses in the River. There are many ranges of mountains, beautiful landscapes such as Sam Mountain, Tay An pagoda, Temple of Lady Chua Xu …

Ha Tien is a small town in the Kien Giang province, in the Mekong Delta region of southern Vietnam. It is about 93 km from Rach Gia city. In the past, Ha Tien was well known and had a low population. it has become one of the most beautiful cities in Vietnam. Gradually more people have come to visit and live there. The industry and tourism of Ha Tien has also developed due to the beautiful landscapes, delicious food and history. Ha Tien is a popular tourist site of the region thanks to its beautiful beaches and landscape.