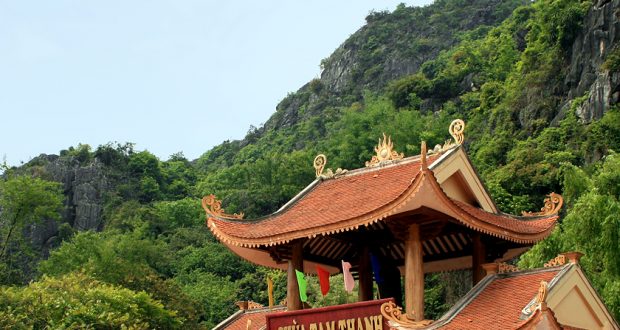 Lang Son is located farther north where the 0 km landmark of National Highway 1A starts, more exactly at Huu Nghi Quan (Friendship gate). This is an important communication way to and from China. It is 150 km from Hanoi.

The main ethnic groups found in that area include the Kinh, Tay, Nung, Dao and Ngai. People live majorly by farming.

Coming to Lang Son you can visit Tam Thanh and Nhi Thanh caves, Co Tien Pagoda and the border markets.

The Tam Thanh Cave is very large with three chambers, has water pond, and has a window opening, which provides scenic views of vast rice fields outside. The outer chamber of the cave on the right has the Tam Giao Pagoda (built in 1777) with six shrines. The second chamber of the cave on the left also shrines, the Ngoc Tuyen River flows through this cave into the mountain, an unusual feature which is described as “a dramatic sight.”

The Nhi Thanh Cave, about 700 m away from the Tam Thanh Cave, was discovered in the 18th century by Ngo Thin Sy, military commander of the Lang Son garrison, whose poems have been inscribed at the entrance to the cave. A plaque erected in the cave depicts a French resident of Long Son in full European dress. The Ngoc Tuyen River flows through the cave.

Important historical places of interest in the province are the war ravaged Dong Don Border town, which has rich war history and attracts visitors, two large lime stone caves within a short distance from the Long Son town, and a 16th century citadel of the Ming Dynasty.

Coming to there, tourists are interesting in Ky Lua or Long Tong traditional festivals. They would like to taste special dishes: roast duck, roast pig, Mau Son wine and lam rice.

Lang Son has potentiality of mineral, forestry, tourism and trading. Star aniseed (hoa hoi) is a specialty. The province is proud of many culture and historical vestiges. They are Rampart of Mac Dynasty, Doan Citadel Vestige, Chi Lang Defile, Ky Cung and Bac Le temples. Apart of these, Ky Lua Market, To Thi and Mau Son mountains, Tam Thanh, and Nhi Thanh grottoes also attract many visitors every year.