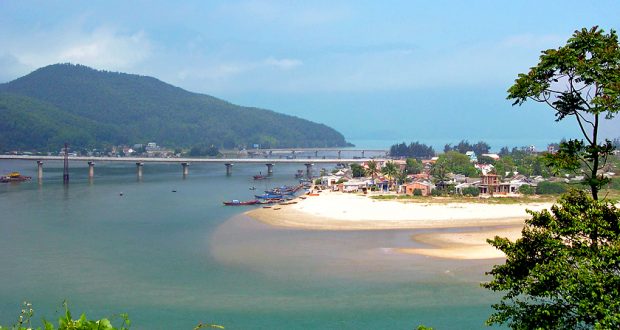 Sandwiched between Phu Gia Pass in the north and Hal Van Pass in the south, Lang Co Beach borders a section of National Highway 1A. It stretches for 10km with the imposing Rang Cua Range providing a picturesque backdrop. Its inside part is called An Cu and a lagoon stretches for eight kilometres with a total area of about 1,800 hectares and opens into the sea via the An Cu estuary. On the other side of the lagoon a railway skirts around the foot of the mountain, providing an interesting example of early twentieth century engineering. Gazing from Hal Van and Phu Gia peaks, Lang Co is like a peninsula surrounded by the sea and lagoons.

Lang Co is a small fishing village lying on the foot of a mountain in the Truong Son range, protruding into the sea. It is a beautiful picture and everything you can imagine of a paradise: coconut trees and small simple bungalows on smooth white sands and turquoise water. At night you can follow local fishermen to the lagoon to watch them lay nets or catch goby and as midnight tolls, join them for a bowl of tasty rice porridge with fresh fish.

The bathing season is from April to the end of July with the average temperature of 25oC and 158 sunny hours per month, ideal for beach enthusiasts. Lang Co has a rich marine life: lobster, tiger pawn, white shrimp, sea crab, mackerel, pomfret, blood ark-shell, blue crab, squid as well as the amazing eels that make their way to the sea from far across the mountain range. They all promise delicacies for those who have a weakness for delicious seafood.

You may enjoy rocking yourself gently in a hammock under the shade of a green coconut tree, watching the waves. At night you can follow local fishermen to the lagoon to watch them lay nets or catch goby and as midnight tolls, join them for a bowl of tasty rice porridge with fresh fish.

You won’t be the first person to fall in love with this enchanting part of the world. Lang Co was a “love at first sight” for Emperor Khai Dinh. Nearly one hundred years ago he was so instantly inspired by the beauty of the place that he composed a poem and had it carved on a stone that is now preserved in An Cu Hong village.

And there are also surprisingly wild natural beauties hidden among the mountains, including canyons, springs, fountains, lakes and rocks, many of which with very poetic and rustic names such as Mo (Apricot) spring or Chan May (Horizon).

The landscape, the air and the rich sea life makes Lang Co a famous beach and an ideal retreat for tourists. Lang Co beach, since June 2009 has become an official member of the “World’s most beautiful bays” club.

So, there’s just one piece of advice for tourists. Get to Lang Co, and get there right now or everybody will get there before you.