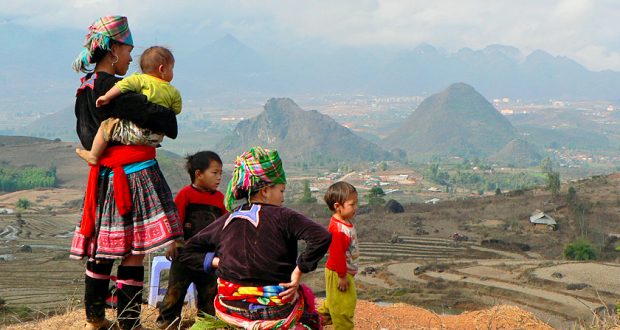 Lai Chau province is the most scarcely populated in Vietnam. The population consists mainly of the Thai, Si La, and La Chi minority groups.

It shares a border with China. It once was a province of the Lan Xang Kingdom, then switched ownership to Vietnam during the French Colonial period.
The total area is more than 17 km2 and its economic potentiality is forestry. The monsoon tropical climate brings a rainy summer and a short winter. The annual average temperature is 23°C and the average rainfall is 2,500 mm.

Lai Chau is said to be the land of Ban and Dao flowers (hoa ban & hoa đào), the unique ones of jungles, which attract and inspire thousands of artists. Yet, most of all, as the nation’s highest mountainous region, the beauty of Lai Chau is structured by the high mountain ranges stretching from the Northwest to the southeast.

It shares the Fansipan Mount – top of the Vietnam’s highest mountain range (Himalaya)- with Sapa (in Lao Cai). With the height of 3,143m, Fansipan is not only the highest in Vietnam but also in the Indochina peninsula, being considered “the roof of Indochina”. Among others, some plateaus such as Sin Ho, Ta Phinh, Dao San, etc. are even higher than 1,500m, thus being covered in cloud, fog, and purely cool atmosphere all the time.

Apart from high mountains, Lai Chau is also rich in narrow valleys, beautiful rivers and springs. The longest and largest river in the province is Da river. These together with others, such as Nam Na, Nam Mu flowing between the ranges, make several roaring and white frothy waterfalls in the quiet forests. One amongst the most popular waterfalls is Tac Tinh, which is higher than 50m with 2 classes, and frequently full of water flows, bringing a magnificient picture of natural beauty.

For those fond of health-care elements, there are some hot and mineral water springs scattering in the province, for examples, Van Bo (in Phong Tho District), Na Dong, Na Don (Tam Duong), and some other hydroelectricity lakes.

People take interest in Lai Chau not only because of its natural beauty, but also of its historical relics. One amongst them is Deo Van Long’s Palace located in Sin Ho District, which the palace of Thai King under the French colony. The palace, covered by the Thai-style architectural features, is also a place for educating the youth of national love.

The second-ranking one is Le Loi’s stele, which was sculptured and set up on Da River bank, unveiling the story of Le Loi’s defeating an upraising troop in the Northwest, keeping the nation’s security. Also, there are some relics of ancient Viet people such as bronze drum and bronze tools, which are vestiges of the Eastern Culture.

Festivals are one among the most activities of Lai Chau in particular and mountainous regions’ in general. The most popular one in Lai Chau is “Hoa Ban festival”, which reflects the cultural and spiritual life of Thai people. In the second lunar month of the year, when it gets warmer and “hoa ban” (the significant kind of flower in the Northwest area), blossoms, “Hoa Ban festival” is celeberated. This is time for boys and girls to meet and get to know each other.
“Gau Tao festival” – “spring traveling”, a festival of H’mong people, is held every spring. After Lunar New Year festival, couples go to the market just for spending time together. The boys play “Khen”, a kind of musical instrument for one another.