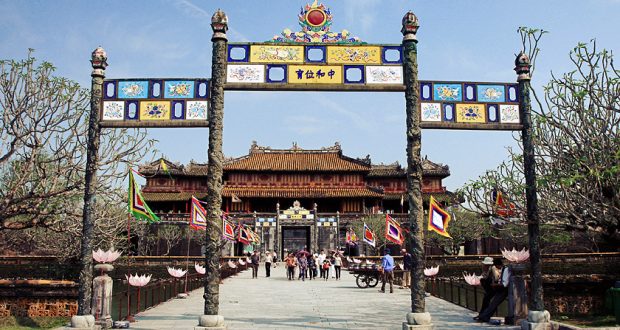 The city is located in central Vietnam on the banks of the Huong River (Perfume River), just a few miles inland from the sea. It is about 700 km (438 mi.) south of the national capital of Hanoi and about 1100 km (690 mi.) north of Ho Chi Minh City, the country’s largest city, formerly known as.

The climate is hot and generally wet. Because of the angle of the central coast of Vietnam to the prevailing winds, however, Hue, like Chennai in India, receives most of its rainfall during the northeast monsoon between October and December. It is driest around March and April, but rain may still fall. The average annual rainfall of 3,000 millimetres (120 in) makes Hue one of the very wettest of Asian cities.

Hue originally called Phu Xuan was built in 1687 and became the capital of Vietnam under the Nguyen Dynasty. During that time it was the cultural, religious and economic center of Vietnam.

In Hue you can see charming women with elegant Vietnamese traditional dresses and conical palm leaf hats. Tourists who have come to Hue even once can not forget the gentleness and gracefulness of its people in their relation with them. Tourists also can enjoy special food in Hue such as rice with corbicular (com hen), steamed thin rice pancakes (banh uot) and other dishes.

The Complex of Hue Monuments is an unique example of a unified planned capital city in southeast Asia. They are recognized by UNESCO as a Cultural World Heritage site.

The seat of the Nguyen emperors was in the Citadel, which occupies a large, walled area on the north side of the river. Inside the citadel was a forbidden city where only the emperors, concubines, and those close enough to them were granted access, the punishment for trespassing being death. Today, little of the forbidden city remains, though reconstruction efforts are in progress to maintain it as a tourist attraction as a view of the history of Hue.

In the surrounding of Hue there are over a dozen mausoleums and royal tombs, but most attractive of them are Gia Long, Minh Mang, Tu Duc and Khai Dinh mausoleums. Besides, in Hue you there are famous pagodas such as Tu Dam and Thien Mu which is on the left bank of beautiful Huong River. Thien Mu pagoda is  the largest pagoda in Huế and chosen as the official symbol of the city.

Less ancient, but not less important, are the French-style buildings along the south bank of the Perfume River, among them are the famed Quoc Hoc High School and the Hai Ba Trung High School.

The Hue Museum of Royal Fine Arts on 3 Le Truc Street also maintains a collection of various artifacts from the city.

A lot of foreign tourists are curious about Hue’s ritual royal music. Originated from 8 kinds of ritual music under Le dynasty, under Nguyendynasty, it has improved into 2 kinds of music: “Dai nhac” and “Nha nhac”, which are really magnificent, and skillful. Those are only played on formal occasions. The Royal Refined Music was proclaimed by UNESCO asa Masterpiece of the Oral and Intangible Heritage of Humanity on December 1993.

Hue’s culture is also found in its famous “non la” or conical hats. You can buy these at the enormous Dong Ba Market as a remarkable and graceful piece of souvenir of Vietnam.

Festivals are also attractions of Hue. There are two main kinds of festival here. Royal festival reflects the life and ritual activities of Nguyen dynasty, almost paying more attention to the ritual than the ceremony. Folk festival consists of multi activities such as Hue Nam festival in Hon Chen temple which follow Champa’s belief, handicraft’s fathermemory festivals, and some cultural activities as boat racing, westling,…