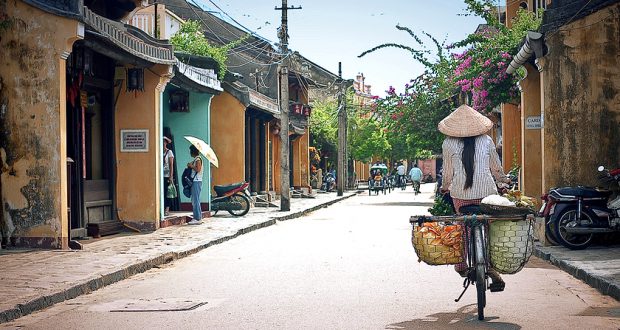 Hoi An is beautiful city  in Vietnam, less than 30 km to the south of Danang. The Acient Town of Hoi An is listed as a UNESCO World Heritage Site.

It is located on the bank of the Thu Bon river, near the East Sea. It was untouched by the fighting during the Vietnam war and remains its centuries-old Vietnamese, Chinese, Japanese and European architecture. In the 17 – 19 centuries, Hoi An was one of the most important port in Southeast Asia. In 17 century the French Priest Alexandre de Rhodes arrived here and described Vietnamese language into Latin – based quoc ngu script.
Hoi An was also the site of the first Chinese settlers in southern Vietnam.

Japanese Covered Bridge (Chua Cau or Lai Vien Kieu), on the west end of Tran Phu Street. The bridge was constructed in the early 1600’s by the Japanese community, roughly 40 years before they left the city to return to Japan under the strict policy of sakoku enforced by the Tokugawa Shogunate, and renovated in 1986. Today, it’s the symbol of Hoi An. Entry is one coupon, but it’s possible to cross back and forth several times without meeting a ticket-checker. If your scruples are bothering you, feel free to leave tribute for the pig statue or the dog statue who stand guard at opposite ends of the bridge.

Four museums in the Old Town:

Museum of Folk Culture, 33 Nguyen Thai Hoc Street. Some may be put off by the bizarre-looking plaster sculptures of Vietnamese peasants, but this museum documents the dress and culture of rural Vietnam.

Museum of Trade Ceramics, 80 Tran Phu Street. The dusty, unlabeled displays of broken pottery are eminently forgettable, but the house itself is nice enough, and it provides a better opportunity to explore the shape and layout of an old Hoi An home than you’ll find at any of the Old Houses (below).

Hoi An Museum of History and Culture, 7 Nguyen Hue Street. The museum contains some old black and white photos of Hoi An taken in the early 20th century. It also houses an old canon, some two-thousand year old pots from the Sa Huynh period, and a case full of 9th century bricks and tiles from the Champa period.

There are three old houses that exist in an awkward halfway state between museum show-piece and somewhat shabby residence for the family that lives there. Your ticket allows admission to one.

Tan Ky House, 101 Nguyen Thai Hoc Street. As above, a younger member of the family will provide a cup of tea and a “tour” that doesn’t stray from the front room of the house, as you’d need to step over sleeping members of the older generation to go anywhere else. The design of the house shows how local architecture incorporated Japanese and Chinese influences. Japanese elements include the crab shell-shaped ceiling supported by three beams in the living room. Chinese poems written in mother-of-pearl are hanging from a number of the columns that hold up the roof.

Numerous congregation halls, where Chinese expatriate residents socialized and held meetings, are dotted about the town. They are typically named after the home region of their members, such as Fujian and Canton. Your ticket allows admission to one. Some do not have ticket-takers, so it’s up to your conscience if you want to try wandering into a second.

Cantonese Assembly Hall (Quang Dong), 176 Tran Phu Street. Built in 1885, it has a calm courtyard with ornate statuary. Take a peek at the half-hidden back yard and its kitschy pastel dragon statues.

Finally, you can choose one of the following to get some “Intangible Culture”:

Hoi An Handicraft Workshop, 9 Bach Dang Street. Folk music performances are offered at 10:15AM and 3:15PM every day except Monday.