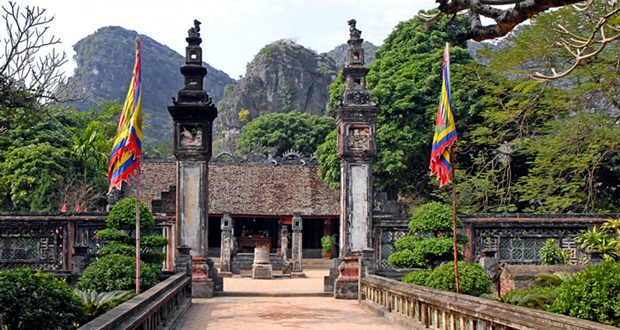 Hoa Lu is a district of Ninh Binh province, about 120 km from Hanoi. Before 1010, Hoa Lu served as the capital of Dai Co Viet.

Hoa Lu ancient capital is located in Truong Yen Commune of this district The ancient capital covered an area of 300ha, including the Inner Citadel and the Outer Citadel. It was surrounded by rock mountain ranges. In the past, Hoa Lu Royal citadel was adorned with splendid palaces, magnificent temples and shrines.

When King Ly Cong Uan transferred the capital to Thang Long (now known as Hanoi), it became the ancient capital. Due to the ravages of time, Hoa Lu Ancient Citadel no longer exists. Now, there are only some vestiges related to the Dinh, Le and Ly dynasties. For example, there is King Dinh temple for worshipping King Dinh Tien Hoang and his sons, Le Temple worshipping King Le Dai Hanh, Queen Duong Van Nga and their sons.

The mountains and sea combined to make Hoa Lu’s picturesque landscape. Hoa Lu lays in a flat valley surrounded by the Trang An limestone mountains, which form a natural wall protecting the old citadel. The city’s northwest is bordered by the Hoang Long River, the tributaries of which run through the capital, cooling the weather within the city and serving as convenient waterways.

Coming to Hoa Lu visitors can attend traditional cultural festivals here, and the most important and largest of them is the Truong Yen Festival, which is held on the 10th day of the third lunar month. The festival is in memory of the Kings of the Dinh and Le dynasties. The festival lasts for three days with many traditional games and martial arts, reflecting local residents’ legends.