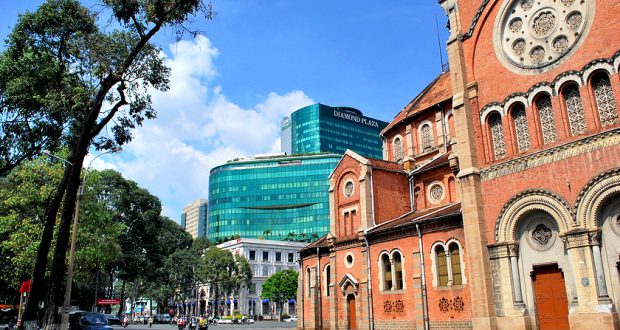 The city has had different names through the years and the latest one – Ho Chi Minh City – appeared in 1975, after National Reunification. But nowadays it is still called SaiGon, especially when referring to the most central part of the city, to which most tourists flock.

Along with the Capital of Hanoi, Ho Chi Minh City (HCMC) has now become Vietnam’s an important economic and cultural center. It is the largest city of Vietnam with the length of 25 km and over 20 km across. Population is about 5 million. People here are friendly and hard-working. Under the former regime, it was considered “The pearl of the Far-East”. HoChiMinh city is nice. The vegetation is green all the year around thanks to fertile land, maritime climate, abundant sunshine, almost equally distributed between the rainy and dry seasons.

The city has a tropical climate with an average humidity of 75%. A year is divided into two distinct seasons. The rainy season, with an average rainfall of about 1,800 millimetres (71 in) annually (about 150 rainy days per year), usually begins in May and ends in late November. The dry season lasts from December to April. The average temperature is 28 °C (82 °F), the highest temperature sometimes reaches 39 °C (102 °F) around noon in late April, while the lowest may fall below 16 °C (61 °F) in the early mornings of late December.

Today, the city’s core is still adorned with wide elegant boulevards and historic French colonial buildings. The most prominent structures in the city center are Reunification Palace, City Hall, the Municipal Theatre, also known as the Opera House, City Post Office, State Bank Office, City People’s Court and Notre-Dame Cathedral. Some of the historic hotels are the Hotel Majestic, dating from the French colonial era, and the Rex Hotel, Caravelle hotel some former hangouts for American officers and war correspondents in the 1960s and 1970s.

What to see in HCMC

Reunification Palace (135 Nam Ky Khoi Nghia Street). Open daily 7:30AM-11:00AM, 1PM-4PM. Also known as Independence Palace (this is the old name). This is a restored five-floor time warp to the Sixties left largely untouched from the day before Saigon fell to the North (construction started in 1962 and finished in 1966). Formerly South Vietnam’s Presidential Palace, the war ended on April 30, 1975 when tank #843 – a replica of which is now parked on the lawn outside – crashed through the gate. Be sure to check out the impressively kitschy recreation room, featuring a circular sofa, and the eerie basement, full of vintage 1960s phones, radios, and office equipment, supposedly left exactly as it was found when the North took over. There is also a photo gallery and a propaganda film recounting how the South Vietnamese supporters and American imperialists succumbed to Ho Chi Minh’s indomitable revolutionary forces, upon which point the South Vietnamese supporters were forgiven and everyone lived happily ever after.

War Remnants Museum (28 Vo Van Tan Street). Open daily 7:30AM-12PM, 1:30PM-5PM, last admission 4:30PM. Formerly known as the of Exhibition House of American War Crimes, the museum was opened in a hurry, less than five months after the fall of the South. It’s currently housed in a rather confused assemblage of seven warehouses, with new purpose-built premises partially open for temporary and permanent exhibits. This disturbing display of man’s cruelty during the Vietnam (American) War includes halls full of gruesome photographs, a simulated “tiger cage” prison and jars of deformed fetuses blamed on Agent Orange. There is very obvious bias as there are no “records” of any unpleasant deeds having been committed by the North Vietnamese Army. Outside, there are helicopters, jets, tanks, and other bits of armament. However watch out for the amputees who will try and sell you their wares. It’s only a block from the Reunification Palace – see the museum pamphlet for a map.

Museum of Vietnamese History, at the intersection of Le Duan Street and Nguyen Binh Khiem (just inside the zoo gates). The museum has a fine collection of Vietnamese antiquities. Read up on Vietnamese history first or you’ll have no idea what you’re looking at. Outside, the Botanical Gardens are very nice and a good place for a cheap lunch away from the crowds. If you care about animal welfare, avoid the zoo.

China town:  The western part of the city is dominated by Cholon (Chinatown), a thickly settled district rife with teahouses and pagodas and the famous Binh Tay Market.

Thien Hau Pagoda ( 710 Nguyen Trai St, Cholon). Dedicated to Lady Thien Hau, the sea goddess, who left two giant turtles to keep an eye on things in her absence. A festival is held in her honor on the 23rd day of the March lunar month. Don’t miss the gorgeous sculptures in the walls of the courtyard outside the temple. Entry free

Dam Sen Water Park, 03 Hoa Binh, Ward 3, District 11. Mon-Sat 8:30AM-6PM, Sundays and Holidays 8AM-7PM. Close to the city centre. Opened in 1999, with new water slides added each year – this water park offers some truly unique water slide experiences (including the amazing “Space Bowl”)! The slides have been badly designed and it’s a common sight to see someone clutching their head when leaving them. Restaurant, health services, and animatronic dinosaurs are on the premises.