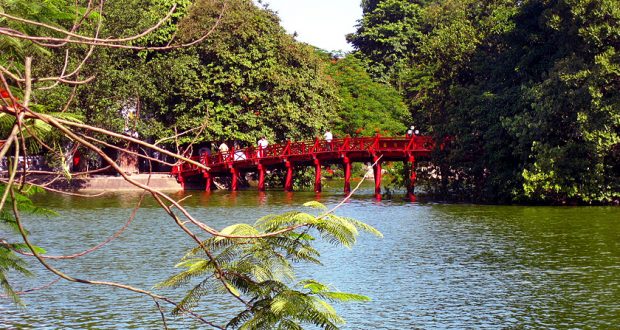 The city is situated on the right bank of the Red river. Hanoi was chosen to be a capital in 1010 by the King LyThai To. Through several successive dynasties, it is remained as the country’s Capital city, the heart and soul of the whole nation and has borne a variety of names, including Dong Kinh (or Tonkin), Dai La, Dong Do … the city was finally named Hanoi (the city in a bend of the river) by Emperor Minh Mang (Nguyen dynasty) in 1831.

As the capital of Vietnam for almost a thousand years, Hanoi is considered to be one of cultural centers of Vietnam, where most of Vietnamese dynasties had left behind their imprint. Even though some relics have not survived through wars and time, the city still has many interesting cultural and historic monuments for visitors and residents alike. The city boasts more than 1,000 years of history, and that of the past few hundred years has been well preserved.

Hanoi hosts more cultural sites than any city in Vietnam, including over 600 pagodas and temples, among of them are Temple of Literature – site of the oldest university in Vietnam 1070, Ngoc Son temple… which are attractive for tourists.

The Old Quarter, near Hoan Kiem lake, has the original street layout and architecture of old Hanoi. At the beginning of the 20th century the city consisted of only about 36 streets, most of which are now part of the old quarter. Each street then had merchants and households specialized in a particular trade, such as silk traders, jewellery, etc. The street names nowadays still reflect these specializations, although few of them remain exclusively in their original commerce. The area is famous for its small artisans and merchants, including many silk shops. Local cuisine specialties as well as several clubs and bars can be found here also. A night market (near Đồng Xuân market) in the heart of the district opens for business every Friday, Saturday, and Sunday evening with a variety of clothing, souvenirs and food.

Ngoc Son temple supposedly dates back to the fourteenth century, although the current buildings were probably built in the eighteenth century. The temple is dedicated to the hero Tran Hung Dao, who defeated a force of 300,000 sent to invade Vietnam by the Mongol Emperor Kublai Khan. There are also altars dedicated to the scholars Van Xuong and La To, the patron saint of physicians.

The island and its temple are reached by a red wooden bridge called The Huc, which translates to “Flood of Morning Sunlight”. Either end of the bridge is guarded by large stone gateways with Chinese characters written on them.

Ho Chi Minh Mausoleum, Presidential Palace, One Pillar pagoda are prominent places which belong to an architectural complex near the West Lake in the city; Flag Tower of Hanoi (Cột Cờ Hà Nội). In 2004, a massive part of the 900 year old Hanoi Citadel was discovered in central Hanoi, near the site of Ba Dinh square

Temple of Literture is a temple of Confucius in Vietnam. Although several Van Miieu can be found throughout Vietnam, the most prominent and famous is that situated in the city of Hanoi, which also functioned as Vietnam’s first university.

A variety of options for entertainment in Hanoi can be found throughout the city. Modern and traditional theaters, cinemas, karaoke bars, dance clubs, bowling alleys, and an abundance of opportunities for shopping provide leisure activity for both locals and tourists. Hanoi has been named as one of the top 10 cities for shopping in Asia by Smart Travel Asia.

A popular traditional form of entertainment is water puppetry, which is shown for example at the Thăng Long Water Puppet Theatre.

Hanoi has rich food traditions and many of Vietnam’s most famous dishes, such as ‘phở’, ‘chả cá’, ‘bánh cuốn’ and ‘cốm’ are thought to come from Hanoi. Hanoi has been selected as one of the top 10 cities for food in the world by Shermans Travel. Vietnam’s national dish ‘Phở’ has been also named as one of the Top 5 street food in the world by globalpost.