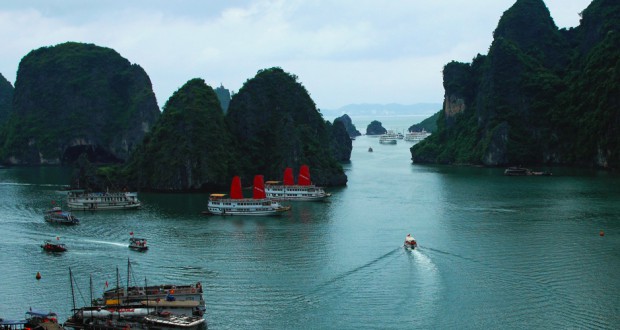 Halong is in Quang Ninh province and 167 km from Hanoi. The area attracts a large number of tourists, both foreigners and Vietnamese. Halong means Descending Dragons. The total area of the Bay is 1500 km2 with thousands of limestone islands….

The area looks like a mountain range in the sea. The limestone in this bay has gone through 500 million years of formation in different conditions and environments. The evolution of the karst in this bay has taken 20 million years under the impact of the tropical wet climate. The geo-diversity of the environment in the area has created biodiversity, including a tropical evergreen biosystem, oceanic and sea shore biosystem. Halong Bay is home to 14 endemic floral species and 60 endemic faunal species.

Historical research surveys have shown the presence of prehistorical human beings in this area tens of thousands years ago. The successive ancient cultures are the Soi Nhụ culture around 18,000–7000 BC, the Cái Bèo culture 7000–5000 BC and the Hạ Long culture 5,000–3,500 years ago.

The bay consists of a dense cluster of over 3,000 limestone monolithic islands (although locals claim there are only 1,969 as this is the year of Ho Chi Minh’s death),each topped with thick jungle vegetation, rising spectacularly from the ocean. Several of the islands are hollow, with enormous caves. Hang Đầu Gỗ (Wooden stakes cave) is the largest grotto in the Ha Long area.

Some of the most remarkable geological events in Halong Bay’s history in the last 1,000 years, include the advance of the sea, the raising of the bay area, strong erosion that has formed coral, and, pure blue and heavily salted water. This process of erosion by seawater has deeply engraved the stone, contributing to its fantastic beauty. Present-day Halong Bay is the result of this long process of geological evolution that has been influenced by so many factors.

Due to all these factors, tourists visiting Halong Bay are not only treated to one of the natural wonders of the world, but also to a precious geological museum that has been naturally preserved in the open air for the last 500 million years.

In April 1994 Halong was considered as a city and then was recognized by UNESCO as a World Natural Heritage. In 2000 the World Heritage Committee additionally recognized Halong Bay for its outstanding geological and geomorphology value, and its World Heritage Listing was updated.

In 2009, the New 7 Wonders Foundation, which runs the New Seven Wonders of the World program, included Halong Bay on its list of nominations as one the World’s 7 Natural Wonders.

On November 11, 2011, the New 7 Wonders Foundation provisionally named Halong Bay as one of them.