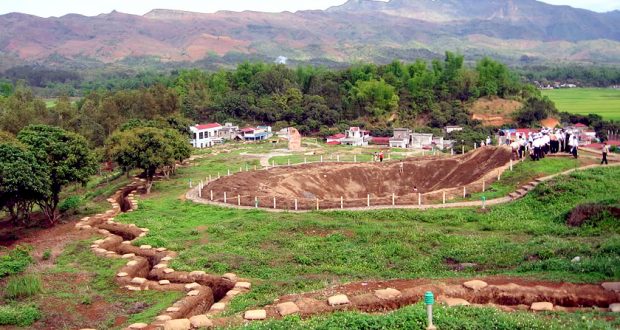 Dien Bien is a Northwestern Vietnam’s province. It is bordered by Lai Chau and SonLa provinces of Vietnam in the East and the South, Pu’er city of Yunnan, China in the North, and Phongsali province of Laos in the West.

The capital of Dien Bien Province, Dien Bien Phu involves in Vietnam’s history and is well-known all over the world, it is famous for being the site of a long battle between French and Vietnamese forces between March and May of 1954. Here French forces were defeated by Vietnamese patriots in May 1954. Dien Bien Phu battle interrupted 9 years of resistance against French colonialists in Vietnam. About 95000 French soldiers died here.

Dien Bien Phu today is a famous tourist destination. Today you can go to visit Dien Bien Phu by air plane or by car. The trip to Dien Bien Phu will help you know more about the famous battle field and  daily life of ethnic groups such as Thai, H’Mong, Dao, Dzay…

The valley of Dien Bien Phu was 18km long and 6-8 km wide when the Dien Bien Phu campaign began. To date, the valley spreads over 20km long. On November 20th, 1953, French paratroopers occupied the valley and built 49 strongholds in three sub-sections. Among these sites include artillery emplacements, remains of airplanes, Muong Thanh Bridge, the command bunker of De Castries, Hill A1 and the cemetery. Some 35km from the center of Dien Bien Phu City, in Muong Phang Commune lays the Command Post of General Vo Nguyen Giap.

Located in Muong Phang commune, Dien Bien district, the position of Pa Khoang lake is very convenient, near the road 279, about 20 km from Dien Bien Phu city, linking Dien Bien Phu city with Muong Phang historical and cultural forest where the relics of the Command of Dien Bien Phu compaign remains. The total area of 2,400 ha, in which 1,320 ha of forest area, 300 ha of farming land, 150 ha of basic construction, and 600 ha of water surface area (the lake contains about 37.2 million m3 of water), the Pa Khoang tourist complex has many favourable conditions for tourist activities such as diverse plants, various topography, mountainous tropical weather, etc.

Tham Pua Cave is situated in Bung Lao Commune, Tuan Giao District, it is an unmentioned natural site. About 10 meters in height, Tham Pua Cave comprised of many small crevices and tunnels is extremely large and deep. A big, even, flat rock stands in the middle of the cave like a large table. Stalactites in various figures such as dragons, lions, phoenixes, elephants and beautiful orchids hang down from the walls of Tham Pua. On January 14, 1954, this cave was a place where an important meeting of the Viet Nam Army to carry out the plan “ quickly attack and quickly advance” took place. It was listed among the National Historical Sites of Vietnam and now it is becoming one of the most tourist-attractive destinations of Dien Bien province.

Ban Phu Citadel is an attractive destination and must-see place  for tourists. Located in Noong Het village, Dien Bien district, about 9 km from the West of Dien Bien Phu city, the citadel was built in the 15th century. It was located at the south of Muong Thanh paddy field with its precinct of more than ten hectares. The structure of this citadel included two systems of defence works which were more than three kilometers and higher than the people. The citadel’s base was surrounded with dense bamboos and a deep moat outside. Noong Het Ward today used to be the centre of the citadel in the past.