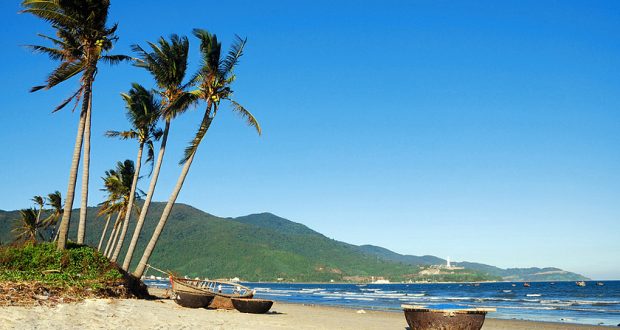 Danang is a largest city in the Central Vietnam. It has different names through years: Cua Han, Touranne and now Danang.

It is a major port city in the South Central Coast of Vietnam, on the coast of the South China Sea at the mouth of the Han River. It is the commercial and educational center of Central Vietnam; its well-sheltered, easily accessible port and its location on the path of the North-South Railway also makes it a hub for transportation. The city keeps the highest urbanization ratio among provinces and municipalities in Vietnam It is located within 100 km of several UNESCO World Heritage Sites, including the Imperial City of Hue, the Old Town of Hoi An, and the My Son ruins.

In 1858 the first French colonialists came to Vietnam through Danang. The independence here was obtained truly in March of 1975.

Danang is one of the most progressive city in Vietnam in term of exploiting Vietnam’s new free market principles. It is aggressive in attracting foreign investment and have developed rapidly. Coming to Danang you can visit Cham museum. There are beautiful sculptures reflecting the 1000-year Cham period. Indonesian and Malaysian influences are seen in the works before 10th century. The museum was found in 1915 and expanded in 1935.

In Danang you also visit Danang Cathedral, Ho Chi Minh museum, Cho Han market, and admire the views of Marble Mountains which are rocky limestone outcrops jutting out of the beach just south of Danang. Paths lead to the top of the forested cliffs, affording spectacular views of Non Nuoc Beach and the East Sea. The caves nestled in the cliffs were originally inhabited by the Cham people. Today, the Marble Mountains are home to various artisans producing sculpture and artwork at its base.

Non Nuoc Beach is a white sandy beach on the outskirts of Danang is renowned for both its spectacular beauty and for its history as an R&R destination for American troops during the Vietnam War, when it was known as “Danang Beach”. Today, the beach, along with My Khe beach to the north, are home to expensive resorts, surfing and entertainment facilities.

Ba Na Hills is a mountain resort with a 5 km-long cable car system which carries guests up to Ba Na’s peak at 1487m above sea level. Visitors will enjoy the cool climate at the summit due to the elevation difference.
Son Tra Mount just some miles away from downtown with some wild streams and resorts along the seaside.

Surrounding Son Tra peninsula are Da stream, Bai But, Bai Rang, Bai Bac, Bai Nom – the beautiful alluvial plains which make interesting feeling for tourists on being ingulfed in splendid of dawn and the quietness of crepuscle in a picturesque land.

The Han River bridge – the symbol for new vitality and the developing desire of the city- was built with the contribution of all the city’s people. It seems that all poetic features of the Han River can be only expressed deeply in the space of Han river bridge with full of wind and ventilation. It not only facilitates transport and potentials for tourism, awaking economic potentials of a vast area in the eastern city but is a cultural spot of Danang people today left behind for the future generations.