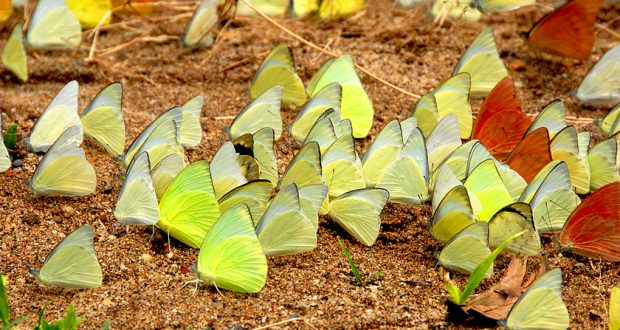 Located only 150km southwest of Hanoi and nestled between the provinces of Ninh Binh, Hoa Binh and Thanh Hoa, Cuc Phuong boasts engaging cultural and wildlife heritage and enchanting scenery. Magnificent limestone mountains rise up majestically from the green rice-terraces and traditional stilt houses of the Muong hill-tribe.

Cuc Phuong National Park is located in Ninh Binh province, in Vietnam’s Red River Delta.. Cuc Phuong was Vietnam’s first national park and is the country’s largest nature reserve. The park is one of the most important sites for biodiversity in Vietnam.

The park consists of verdant karst mountains and lush valleys. Elevation varies from 150 meters (500 feet) to 656 m (2,152 feet) at the summit of May Bac Mountain, or Silver Cloud Mountain. The limestone mountains house numerous caves, many of which are accessible for exploration.

Cuc Phuong is home to an amazing diversity of flora and fauna. Inhabitants of the park include 97 species of mammals, most notable endangered langurs ; 300 species of birds; 36 reptilian species; 17 species of amphivians; 11 species of fish; 2,000 species of vascular plants, and thousands of species of insects. A number of species in the park are listed on Vietnam Red book of endangered species.

Primates in the park include macaques, gibbon, Francois’ Leaf Monkey and slow loris. Other mammals including bats, porcupine, flying squirrel, small striped squirrel, belly-banded squirrel, and the rare Black Giant Squirrel. In the past the park was home to Asiatic Black Bears, wild dogs, and tiger, but over hunting and lack of prey have most led to the loss of these species. Leopard, clouded leopard and jungle cat may still be present in the park.

The average temperature in Cuc Phuong is 21 Celsius (70 Fahrenheit), with a mean winter temperature of 9C (48F). High temperatures can reach above 30C (85 F) and lows are just above zero (32 F). At the low elevations in the valley the temperature is hot and humid while at higher elevations the temperature drops and frostbite is a threat. On average it rains more than 200 days a year and the average annual rainfall is 2,100mm (7 feet). The dry season is November to February, the driest months being December and January.

Flora in the park includes multi-layered canopy; trees up to 70m in height; flowers, including orchids; ferns with amazingly tall leaves; and an abundance of liane and cauliflory. The park also contains plants used for such practicalities as spices and medicines as well as edible fruits, nuts, and shoots.

It is no wonder that researchers, naturalists, enthusiasts and conservationists alike are drawn to this corner of the world. The ancient forest contains almost 2000 species of trees and amongst them lives some amazing and rare animals including the Clouded leopard, Delacour’s Langur, Owston’s Civet, Otters and Asian Black Bears.