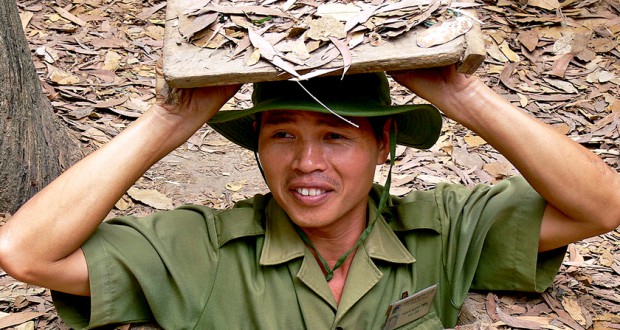 The tunnels of Cu Chi are an immense network of connecting underground tunnels located in the Cu Chi district of Ho Chi Minh City (Saigon), Vietnam, and are part of a much larger network of tunnels that underlie much of the country. The Cu Chi tunnels were the location of several military campaigns during the Vietnam War, and were the ‘Viet Cong’s base’ of operations for the Tết Offensive in 1968.

Situated at the gate of Saigon and linking it to the revolutionary bases, Cu Chi played an important role in both wars of resistant against colonialism and neo-colonialism. It has total area of 4300 hectares. These tunnels were constructed and used by Vietnamese soldiers to conduct operations. There are living area, sleeping quarters, storage centers, underground hospitals, kitchen, and communication centers. These tunnels stretches from Saigon to the Cambodian border. The tunnels nowadays maintains its original.

The 75-mile (121 km)-long complex of tunnels at Cu Chi has been preserved by the government of Vietnam, and turned into a war memorial park. The tunnels are a popular tourist attraction, and visitors are invited to crawl around in the safer parts of the tunnel system. Some tunnels have been made larger to accommodate the larger size of western tourists, while low-power lights have been installed in several of them to make traveling through them easier and booby traps have been clearly marked. Underground conference rooms where campaigns such as the Tết Offensive were planned in 1968 have been restored, and visitors may enjoy a simple meal of food that ‘Viet Cong’ fighters would have eaten.

Above-ground attractions include caged monkeys, vendors selling souvenirs, and a shooting range where visitors can fire a number of assault rifles, such as the M16 rifle or AK-47, as well as a light machine gun like the M60.

Now the unseen and undeclared No Man’s Land is undergoing a revival, saluted as a Relic of National History and Culture with its Halls of Tradition displaying pictures and exhibits. The nearby Ben Duoc-Cu Chi War Memorial, where the reproduced tunnels have been built, stands as an-above ground salute to a hidden war.