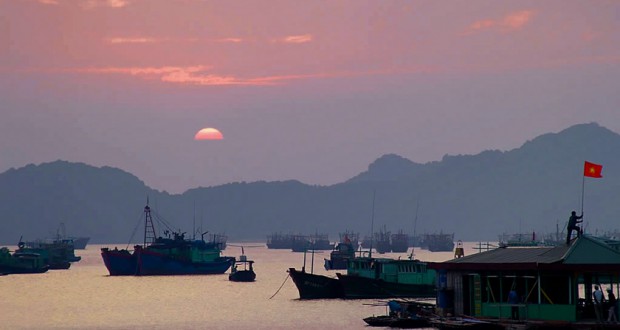 Cat Ba is the largest island in the Ha Long Bay region with the total area of 140 km2 and approximately half of its area is covered by a National Park, which is home to the highly endangered Cat Ba Langur.

Cat Ba Island means “Women’s Island” (Cat meaning sandy and Ba meaning women). Legend has it that many centuries ago, three women of the Tran Dynasty were killed and their bodies floated all the way to Cat Ba Island.

This golden-headed langur is rarely seen, as fewer than 100 specimens are thought to survive in the wild, although it is the subject of a well-organized conservation program. The Park covers both land and marine areas and has a high biodiversity, although it is at risk from too rapid an increase in tourism. Other mammals in the Park include civet cats and oriental giant squirrels. The island possesses many kinds of birds such as hornbills, hawks and cuckoo birds. The park is surrounded by fine beaches with coral reefs offshore. Cat Ba features small waterfall and grottoes in limestone rocks formation.

The island has a wide variety of natural ecosystems, both marine and terrestrial, leading to incredibly high rates of biodiversity. Types of natural habitats found on Cat Ba Archipelago include limestone karsts, tropical limestone forests, coral reefs, mangrove and sea grass beds, lagoons, beaches, caves, and willow swamp forests. Cat Ba Island is one of the only populated islands in Ha Long Bay, with roughly 13,000 inhabitants living in six different communes, and 4,000 more inhabitants living on floating fishing villages off the coast.

Cat Ba itself is attractively situated around a bay teeming with small boats, many of which belong to pearl or shrimp farmers, and can become very busy at weekends and during public holidays. The promenade has illuminations and a large fountain which only plays after dark; it is backed by a strip of cheap hotels and bars, but dominated by the wooded limestone hills behind. The island is a national park of Vietnam and was recognized by UNESCO in December 2004 as a Biosphere reserve of the world.