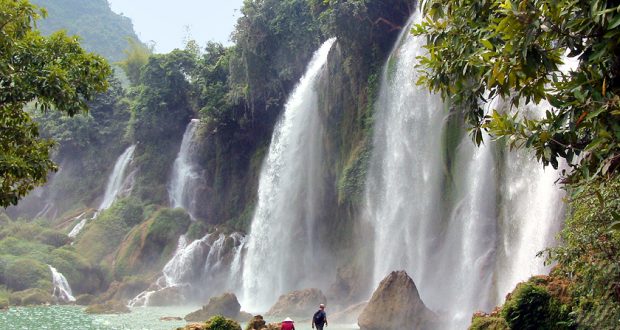 Cao Bang is a town in northern Vietnam. It is the capital and largest settlement of Cao Bang province. It is located on the bank of the Bang Giang Rver, and is around 30km away from the border with China.

In this area there are some places where President Ho worked before the August 1945 Revolution such as Pac Bo, Coc Bo caves, Lenin Steam, Khuoi Nam Stream. A stream and a hill near Pac Bo were named as “Lenin Stream” and “Karl Marx Mountains”. Nine ethnic minority groups inhabit here, including the Tay, Nung, Dao, H’Mong. The total area is more than 6000 square kilometers with the population of 560,000. The famous sites here are Thang Then in Tra Linh, Ban Gioc waterfalls in Trung Khanh.

Ky Sam Temple was built as a memorial at Nung village (200 metres (660 ft) east of Highway 203) of Ngan in honour of Nung Tri Cao, Nung Lord of Quang Uyen for organizing the ethnic minority revolt in the 11th century against the Vietnamese monarchy.
Coi Binh Church is one of the three churches that was built in 1906 by the French; the other two are at Cao Bằng and That Khe. Except for the Vicar’s house the rest of the residential buildings around the church were destroyed in 1979. The vicarage is now the venue of “Cao Bang region’s most famous apiaries”.

Mac King’s Temple is the 16th century palace of the Mac Dynasty. It is located on a hill top above the Lang Den (meaning the “Temple Village”). It is located on the west bank of the Dau Gen River, which is a tributary of the Bang Giang River. The construction of this palace is credited to a general of the Le Army in 1521-1522 after he forcibly dethroned the 11 year King Lê Chieu Tong, exiled him and installed his brother Le Thung as the king.

Ban Giac Waterfalls are located 80 kilometres (50 mi) north of Cao Bang at the Vietnam-China International Border. It originates from the Quy Xuan River and falls over a height of 30 metres (98 ft) and is300 metres (980 ft)wide. At the top, the waterfall is seen in three parts divided by rocks and trees. As the water falls down the cliff and merges with sunlight, a seven-coloured rainbow formation is witnessed. Many green trees and flowers that perfume the air are located at the base of the fall.

Thang Hen Mountain Lake, in Tra Linh district, consists of 36 small natural lakes located on the top of a hill at 1,000 metres (3,300 ft) elevation. The lakes have been created in limestone formations and some of them flow out as steams. The lakes flow through the river, which eventually becomes the Ban Gioc waterfall.