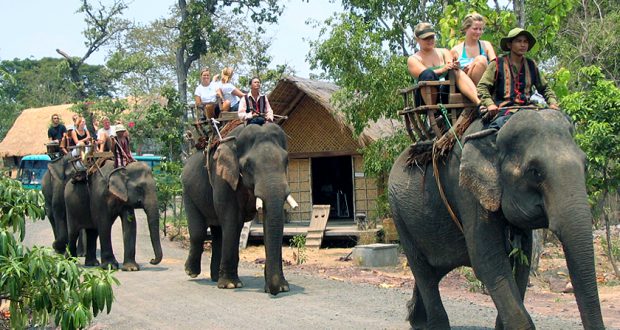 Buon Ma Thuot is the capital city of Daklak province, in the Central Highland of Vietnam. Its population is approximately 300,000. The city is the largest in Vietnam’s Central Highlands region and is famous as the regional ‘capital of coffee’.

It is also a useful base for treks to nearby Yok Don National Park.

Buon Ma Thuot was originally settled by the Edeh, but due to the incoming Viet settlement after the Vietnam War and the active acculturation policy, less than 15% (around 40,000) are still Montagnards.

Lac Giao Monument is about 1 km from Buon Ma Thuot six-road junction, Dak Lak Province. The monument shows the local people’s gratitude to revolutionaries who sacrificed for national independence and who live forever in the people’s hearts.

Khai Doan is a pagoda of the Viet people living in Dak Lak Province. Khai Doan Pagoda was built between 1951 and 1953, in a large open area in Buon Ma Thuot. The pagoda’s architecture is in tam character style, with a three-entrance gate at the front. The central chamber is comprised of two sections; the front is built in the long-house style of the Western Highlands, with the pillars and rafters of the Viet.

Dak Lak Ethnology Museum displays pictures and historical, cultural artifacts of the people’s life in Dak Lak. First floor: Displaying pictures and artifacts about natural conditions of Dak Lak Province and the culture of E De and M’Nong ethnic groups; as well as models of stilt house, traditional costumes, production tools, statues at tomb houses, and collections of wine jars, bamboo backpacks, and gourds. Second floor: Displaying pictures and artifacts about the resistance wars against the French colonialists and the US imperialists of the Dak Lak people.