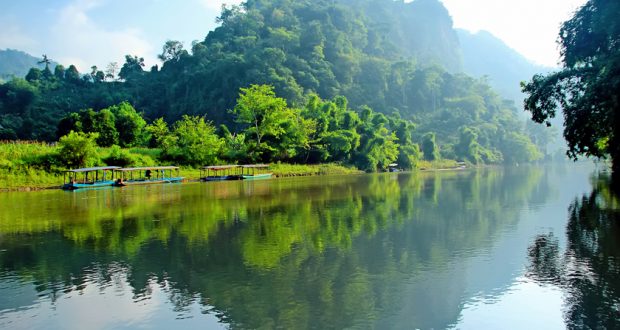 Ba Be Lake is in Bac Can province, 240 km from Hanoi. It is one of the most beautiful and valuable natural lakes in the world. Ba Be means 3 lakes. It is a part of Nang river. Ba Be Lakes area has a lot to offer, including waterfalls, rivers, valleys, lakes, and caves all set amidst picturesque landscapes. Ba Be Lakes, located 145 meters above sea level, are among the largest natural lakes in Vietnam with a total surface area of 500 hectares. The area was established as a national preserved forest and tourist center in 1978.

Having been formed approximately 200 million years ago, the lake is surrounded by limestone cliffs, which in turn are covered by primary forests. The lake comprises three zones named Pé Lầm, Pé Lù, and Pé Lèng. Three rivers, named Năng, Tả Han, and Nam Cường, are the main inflows of the lake. The Năng river enters the lake through a large waterfall called Đầu Đẳng. In the lake there are also three islands, named Án Mã, Khẩu Cúm, and Po Gia Mải (literally “Widow’s Island”).

Ba Bể Lake is a featured geographical science and is a biodiversity reservoir. It is a part of the Ba Be National Park.

Ba Be Lakes are surrounded by many ancient trees, from which several varieties of precious wood are obtained. The vegetation in Ba Be National Park mainly consists of limestone and evergreen forest. According to primary survey documents, 417 species of trees including 300 branches, 114 parenties. Also, hundreds of orchids and species of medicine-plants. The system of animals including; land, aquatic and flying animals covering 319 species of animals in 27 forms, 85 parenties in which 42 species recorded in Vietnam Red Book with 3 endemic animal species that are gibbon (snub no se) Bamboo-Thread and Red Algae. The surface of the lake was tranquil – a beauty spot if ever there was one, in this land of so much beauty.

Coming here, you can rent a boat and go along Nang river to visit Dau Dang waterfall and some minority villages.

Puong Cave is a large cave in the north of the park through which the Nang River flows. The main cave is up to 50 meters high and about 300 meters long. It is inhabited by a population of 5 to 10 000 bats belonging to 18 species.

The “Fairy Pond” is rock basin filled with clear water which seeps through the surrounding limestone rock.

The Dau Dang Waterfall is formed by the Nang River. It consist of a sequence of rapids which stretch over a length of almost one kilometer. Widow Island is a small, cone-shaped islet near the center of the southern lake. According to the local legend, the islet was once the home of an old widow who was spared from a flood through divine intervention.