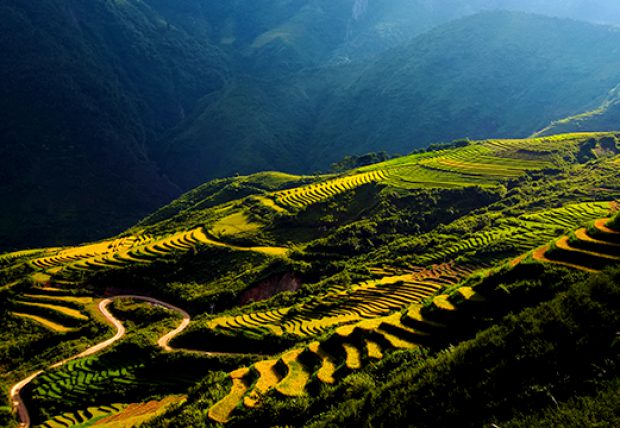 Leave the busy life of Hanoi capital city behind to look for the contrast in the Northwest mountainous area. The tour is suitable for the people who prefer to explore remote areas and the customs of hill tribal people. It is all about contemplating the most splendid part of Vietnam, where concentrates magnificent but dangerous mountains ranges, incredible terraced paddy fields, and various ethnic tribes such as H’mong, Tay, Black Thai, White Thai, Muong, Dao… You will also have a chance to learn more about the Great Victory of Dien Bien Phu battlefield occurred in 1954.

Hanoi – Mai Chau – Pick up at your hotel in Hanoi at 8:00 am. Drive to Mai Chau (150 km). Visit Muong minority village in Hoa Binh en route. Lunch in Hoa Binh. Then continue to go to Mai Chau. Evening: enjoy pipe rice wine and folk dance performance by local people. Dinner and night at a stilt house in a Thai minority village. (B,L,D)

Mai Chau – Son La – After breakfast go around the village, then drive to Son La ( 180 km) with stops on the way for talking picture. This province borders Laos to the South. Lunch en route. Visit the former prison built by French colonialism in 1908. In 1930-1945, it was expanded and became the place where detained revolutionary soldiers. Dinner and night at a minihotel. (B,L,D)

Son La – Dien Bien – Leave Son La for Dien Bien, lunch in Dien Bien where is famous for its battle in 1954. The battle of Dien Bien Phu is described by historians as “the first time that a non-European colonial independence movement had evolved through all the stages from guerrilla bands guerrilla bands to a conventionally organized and equipped army able to defeat a modern Western occupier in pitched battle”. PM: visit Dien Bien Phu battle field, museum of ethnic groups. Dinner and night at minihotel. (B,L,D)

Dien Bien – Lai Chau – Drive to Lai Chau, the most scarcely populated province in Vietnam which shares a border with China. Dinner and night at minihotel. (B,L,D)

Lai Chau – Sapa – Leave Lai Chau for Sapa, the frontier town and district in Lao Cai province in northwest Vietnam. PM: visit Ham Rong Mountain, viewing the beautiful scenery of the town and surrounding area. Have a trek to minority village. Night at a minihotel in Sapa. (B,L,D)

($*) Prices are subject to change.