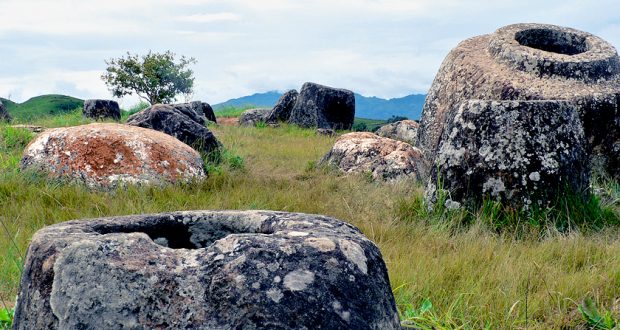 This province is located in the southeast of Luang Prabang, and it is one of the most contaminated of unexplored ordnance in the world which remaining from Indochina War. Well-known to this province is its precious Plain of Jars.

Xiengkhuang is located in the north of Laos. Most of its landscape consist of mountains and hills. Xiengkhuang province offers the awesome beauty of high green mountains and rugged karst formations. The original capital city, Muang Khun, was almost totally obliterated by US bombing and consequently, the capital was moved to nearby Phonsavanh. Of several Muang Khun Buddhist temples built between the 16th and 19th century, only ruins remain. Vat Pia Vat, however, survived the bombing and can be visited.

The main attraction in Xiengkhuang province is the Plain of Jars. Stone jars of different sizes, apparently carved out of solid rocks, are scattered all over the plateau. The biggest one reaches a height of 3.25 meters. Researchers have advanced different theories as to the function of the stone jars, which are estimated to be 2,500 to 3,000 years old.

An air of mystery hangs over the Plain of Jars. Local folklore says that, in the 6th century, the warrior king, Khun Jeuam, brought his army from Southern China and defeated the evil chieftain, Chao Angka. The mighty battle was followed by a mighty feast, at which hundreds of gigantic jars of lao-lao rice wine were consumed. Khun Jeuam was, apparently, as bad at tidying up as he was good at throwing parties, for he left behind all of the empty jars, of which nearly three hundred remain, scattered around the flat plains near Phonsavan, including his own six-tonne “victory cup”.

There is little physical evidence to say that this fanciful legend does not hold at least a little truth. Major wars have been fought on the plains over the centuries, as both Lao, Siamese and Vietnamese armies attempted to win control of them. In the nineteenth century, Chinese bandits further pillaged the plains so that, by the time French archaeologist, Madeleine Colani, arrived in the mid-1930s, almost all that remained of the ancient civilization of the plains were the jars.