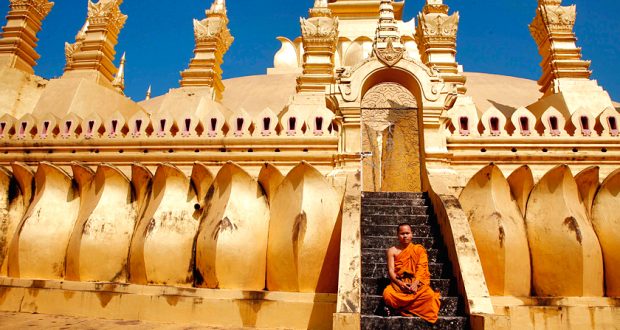 Place of the central government and center for culture and commerce is Vientiane, the capital city of Laos. Situated on the bank of the longest river in the Southeast Asia, the Mekong River and sharing border with Thailand through the Friendship Bridge.

It is also Laos’ largest city. Vientiane is located at 17°58′ North, 102°36′ East (17.9667, 102.6). Sri Sattanak, or Sisattanak  is a former name of Vientiane. It is often confused with Sri Sattanakanahut, the Pali name of Lan Xang, the Kingdom of the Million Elephants. Sisattanak now is the name of one of the five districts of the city Vientiane.

Vientiane features a tropical wet and dry climate with a distinct monsoon season and a dry season. Vientiane’s dry season spans from November through March. April marks the onset of the monsoons which in Vientiane lasts about seven months. Vientiane tends to be hot and humid throughout the course of the year, though temperatures in the city tend to be somewhat cooler during the dry season than the wet season.

Buddhist monasteries, important monuments and remarkable scenery surrounding are the main attractions. You are ought not to be missed Wat Sisaket, Haw Pra Keo, and That Luang Stupa.

Although a small city still, the capital has many sites for tourists to see. The city contains many temples and Buddhist monument with Pha That Luang, a Buddhist stupa, one of the most famous in Laos. It is the most important national cultural monument and very popular amongst foreign tourist. The original was built in 1566 by King Setthathirath, and was restored in 1953. The golden stupa is 45 meters tall and is believed to contain a relic of the Lord Buddha.

Another site that is also popular amongst tourists is Wat Si Muang. The temple was built on the ruins of a Khmer Hindu shrine, the remains of which can be seen behind the ordination hall. It was built in 1563 and is believed to be guarded by the spirit of a local girl called “Si”. Legend says that Nang Si, who was pregnant at the time, leapt to her death as a sacrifice, just as the pillar was being lowered into the hole. In front of the temple stands a statue of King Sisavang Vong.

The memorial monument, Patuxai, began construction in 1957 and completed in 1968, is perhaps the most prominent landmark in the city. While the arc de Triomphe in Paris inspired the architecture, the design incorporates typical Lao motifs including “Kinnari”, a mythical bird woman. Energetic visitors can climb to the top of the monument, which reveals an excellent panoramic view of the city.

Buddha Park was built in 1958 by Luang Pou Bounlua Soulilat and contains a collection of Buddhist and Hindu sculptures, scattered amongst gardens and trees. The park was built about 28 kilometers south of Vientiane at the edge of the Mekong River.