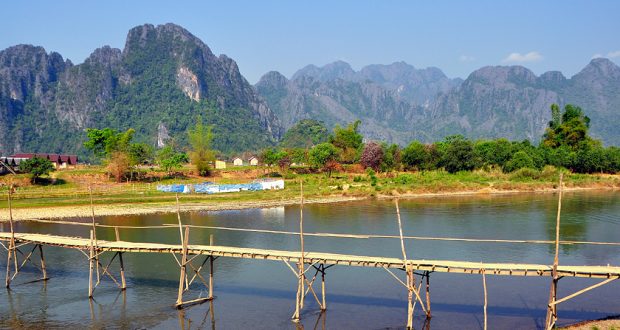 Traveling 161 kms. to the north of Vientiane is a small town called Vangvieng. It surrounded by mountains scenery and Nam Song River that lead to stalactite and stalagmite caves and it is also best for canoeing and rafting. The most notable feature of the area is the karst hill landscape surrounding the town.

This fascinating place is perfect for those who are searching for relaxation and be away from speedy life-style of the modernization.

Vang Vieng today is mainly a backpacker town. The main street is littered with guest houses, bars, restaurants, internet cafes and tour agencies. One of the main attractions of the town is inner tubing on the river and kayaking. During the wet season, the river can be a series of raging rapids, but during the dry season, some of it is little more than a trickle. Climbing the limestone mountains is another popular activity.

The Vang Vieng local community have organised themselves into a cooperative business association to sell tubing as an activity, in a system in which 1,555 participating households are divided into 10 village units, with each village unit taking its turn on a ten-day rotation to rent inner-tubes to the tourists. Thanongsi Sorangkoun, owner of the organic farm in Vang Vieng, says that tubing inadvertently began in 1999 when he bought a few rubber tubes for his farm volunteers to relax on along the river. During the wet season, the river can be a series of rapids. Other activities include trekking and rock climbing in the limestone mountains. There are also numerous caves, such as Tham Phu Kham cave half an hour from Vang Vieng by tuk-tuk or the Tham Jang cave closer to Vang Vieng. A market located five kilometres north of the town sells Lao textiles, household items and foodstuffs. The town is situated on the main north-south highway, Route 13 from Luang Prabang to the capital, Vientiane. It is about eight hours by bus to Luang Prabang and four hours to Vientiane (152 km).

Just a short walk from town are many ethnic Lao, Kmou, and Hmong villages, while Vang Vieng Organic Farm is located around 4 km north of the town in the village of Phoudindaeng. There are also opportunities for community involvement such as teaching, while it’s also possible to stay in a house made of mud bricks at the organic farm. Wat Done Hor is the oldest temple among five temples located in Vang Vieng, built in 1903.