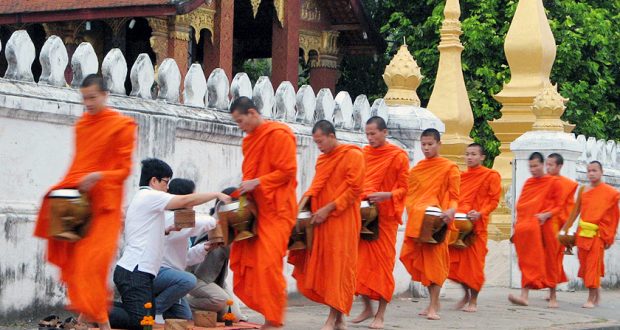 Luang Prabang is a city located in north central Laos, where the Nam Khan river meets the Mekong River about 425 km north of Vientiane. It is the capital of Luang Prabang Province.

The city was formerly the capital of a kingdom of the same name. Until the communist take over in 1975, it was the royal capital and seat of government of the Kingdom of Laos.

The main part of the city consists of four main roads located on a peninsula between the Nam Khan and Mekong rivers. The city is well known for its numerous temples and monasteries. Every morning, hundreds of monks from the various monasteries walk through the streets collecting alms. One of the major landmarks in the city is a large steep hill on which sits Wat Chom Si.

The first Lao Kingdom, Lane Xang was consolidated here. It was well known as the main sources of the monarchical power. Many ancient temples dating back in 13 Century are still preserved for visitors to see. The king Royal palace and Phousi hill are one of the many that visitors ought not to be missed. Luang Prabang was voted as the World Heritage Site in 1996.

What to see in Luang Prabang?

Luang Prabang has both natural and historical sites. Among the natural tourism sites, there are the Kuang Si Falls and Pak Ou Caves. Tourists may also ride elephants. At the end of the main street of Luang Prabang is a night market where stalls sell shirts, bracelets, tea – suitable souvenirs. The Haw Kham Royal Palace Museum and the Wat Xieng Thong temple are among the most well known historical sites. Along with the magnificent wats a significant part of the old town’s appeal are the many French provincial style houses.

The Kuang Si Falls, sometimes spelled Kuang Xi, is a three tier waterfall about 29 kilometres (18 mi) south of Luang Prabang in Laos. These waterfalls are a favourite side trip for tourists in Luang Prabang. The falls begin in shallow pools atop a steep hillside. These lead to the main fall with a 50 m cascade. The water collects in numerous turquoise blue pools as it flows downstream. The many cascades that result are typical of travertine waterfalls.

Near Pak Ou (mouth of the Ou river) the Tham Ting (lower cave) and the Tham Theung (upper cave) are caves overlooking the founder name Mekong River 25 km from Luang Prabang, Laos. They are a group of caves on the right side of the Mekong river, about two hours upstream from the centre of Luang Prabang, and have become well known by tourists. The caves are noted for their miniature Buddha sculptures. Hundreds of very small and mostly damaged wooden Buddhist figures are laid out over the wall shelves. They take many different positions, including meditation, teaching, peace, rain, and reclining (nirvana).

The Royal Palace (official name “Haw Kham”) in Luang Prabang, Laos was built in 1904 during the French colonial era for King Sisavang Vong and his family. The site for the palace was chosen so that official visitors to Luang Prabang could disembark from their river voyages directly below the palace and be received there. After the death of King Sisavang Vong, the crown Prince Savang Vatthana and his family were the last to occupy the grounds. In 1975, the monarchy was overthrown by the communists and the Royal Family were taken to re-education camps. The palace was then converted into a national museum.

Wat Xieng Thong is one of the most important of Lao monasteries and remains a significant monument to the spirit of religion, royalty and traditional style of a fascinating city. There are over twenty structures on the grounds including shrines, pavilions and residences, in addition to its gardens of various flowers, ornamental shrubs and trees. Many of the structures are notable, in addition to the magnificent sim, several deserve special attention.