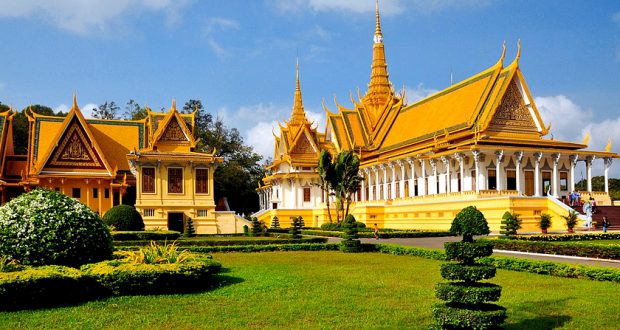 Phnom Penh’s history begins with Lady Penh who discovered five Buddha images concealed in a tree and had a pagoda named Wat Phnom Don Penh built on that spot. The city that took its name from the pagoda was founded nearly a century later, becoming the capital in 1866.

Following its recent traumatic history, parks, gardens and elegant villas are now being restored. Tree-lined boulevards still reflect the elegance of the city’s French colonial past, and camera-clicking tourists sit in pedicabs (“cyclos”) which weave their way leisurely through the increasing numbers of cars and motorcycles. This pleasant scene, coupled with the current bustle of optimistic commerce, belies the chilling fact that the city stood abandoned and empty between 1975 and 1979 during the forced evacuation by the detested Khmer Rouge.

Once known as the “Pearl of Asia”, it was considered one of the loveliest French-built cities in Indochina in the 1920s. Phnom Penh, along with Siem Reap and Sihanoukville, are significant global and domestic tourist destinations for Cambodia. Founded in 1434, the city is noted for its beautiful and historical architecture and attractions. There are a number of surviving French colonial buildings scattered along the grand boulevards.

The two most visited museums in the city are the National Museum, which is the country’s leading historical and archaeological museum, and Tuol Sleng Genocide Museum, a former Khmer Rouge prison.

The oldest structure is the Wat Phnom from the founding days of the city, constructed in 1373. The main tourist attractions are the Royal Palace with the Silver Pagoda, the National Museum, constructed during the French colonial era in the late 19th century in the classical Khmer style hosts a vast collection of Khmer antiquities; the Independence Monument (Khmer: Vimean Akareach), although modern from the 1950s, is also constructed in the ancient Khmer style.

The French, who were the colonial masters from the 19th century to the 1940s, also left their mark, with various colonial villas, French churches, boulevards, and the Art deco market Phsar Thom Thmei. A notable landmark of the colonial era is the Hotel Le Royal.